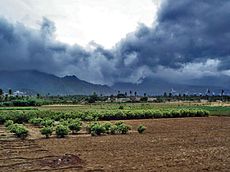 Advancing monsoon clouds and showers in Aralvaimozhy, near Nagercoil, India.

A monsoon is a seasonal wind which lasts for several months. The word was first used in English for the seasonal rains in the Indian subcontinent. These rains blow in from the Indian Ocean and Arabian Sea in the southwest bringing heavy rainfall to the area.

Monsoons also occur in other regions such as in North America, Sub-Saharan Africa, Brazil and East Asia.

The mechanism is simple: land heats up faster than water. The temperature difference between the land and sea can be as much as 20°C – land temperatures in India can be hotter than 45°C, while the surrounding water in the Bay of Bengal and the Arabian Sea remains in the low 20s. The heat absorbed by the land warms the air above it. The hot air rises, and cooler ocean air rushes inland to replace it. As it moves, it carries moisture with it, releasing it over land as the summer monsoon (also known as southwest monsoon).

The hot air over the land tends to rise, creating an area of low pressure. This creates a steady wind blowing toward the land, bringing the moist near-surface air over the oceans with it.[1] rainfall is increased by the moist ocean air being lifted upwards by mountains, as with the Tibetan Plateau,[2] and by surface heating.[3]