Phoenix is the capital and the largest city in the U.S. state of Arizona. The city is the county seat of Maricopa County. It is the largest capital city in the United States and the only capital with over more than million people. The city is along the normally dry Salt River. It became a city on February 25 1881. People who live in Phoenix are known as Phoenicians.

As early as 700 AD, the Hohokam people lived in the land that would become Phoenix. The Hohokam created about 135 miles (217 km) of irrigation canals. This let them grow things on the land.

It is believed that between AD 1300 and AD 1450 drought and floods caused the Hohokam to no longer live in the area.[5] Spanish and Mexican explorers knew of the area but they did not go as far north as the Salt River Valley.

In 1867, Jack Swilling of Wickenburg, Arizona came to the area. He saw that the land was good for farming. The only problems he saw were a lack of rain and good irrigation. Swilling corrected the problem by having a series of canals built. A small community was created about four miles (6 km) east of the where the city is today.[5]

The farming community was named Swilling's Mill. The name was later changed to Helling Mill, Mill City, and East Phoenix. Swilling was a Confederate soldier during the Civil War. He wanted to name the city "Stonewall," after Gen. Stonewall Jackson. Other people had other ideas for names. Finally, Lord Darrell Duppa suggested the name "Phoenix". The name is the same as the mythological fire bird which is born again from its own ash after it dies. It was a good name for a city born from a former civilization.[6]

The coming of the railroad in the 1880s was the first of several important events changed the economy of Phoenix. Phoenix became a trade center. In response, the Phoenix Chamber of Commerce was created on November 4 1888.

A panoramic view of Phoenix from the South Mountain Range, Winter 2008

Satellite image of the Phoenix Metro Area in 2002.

Other than the mountains in and around the city, the topography of Phoenix is mostly flat. This allows the city's main streets to run on a precise grid with wide, open-spaced roadways.

The Salt River runs westward through the city of Phoenix. The riverbed is often dry or just a trickle due to large irrigation usage. The river is full after infrequent rainstorms or when more water is released from upstream dams. The city of Tempe has built two inflatable dams in the Salt River bed to create a year-round recreational lake, called Tempe Town Lake. The dams are deflated to allow the river to flow unimpeded during releases. Lake Pleasant Regional Park is in Northwest Phoenix in the suburb of Peoria, Arizona.

As with most of Arizona, Phoenix does not observe daylight saving time. In 1973, Gov. Jack Williams argued to Congress that energy use would increase in the evening. Refrigeration units were not used as often in the morning on standard time. He went on to say that energy use would rise "because there would be more lights on in the early morning." He was also concerned about children going to school in the dark, which indeed they were.[9] Navajo Nation lands in Northeastern Arizona observe daylight saving time in conjunction with the rest of their tribal lands in other states.

Phoenix has an arid climate, with very hot summers and temperate winters. The average summer high temperature is among the hottest of any populated area in the United States and approaches those of cities such as Riyadh and Baghdad. The temperature reaches or exceeds 100°F (38°C) on an average of 110 days during the year, including most days from late May through early September, and highs top 110 °F (43 °C) an average of 21 days during the year. On June 26, 1990, the temperature reached an all-time recorded high of 122 °F (50 °C).[10]

On average, Phoenix has only 2 days per year where the temperature drops to or below freezing.[11] Frequently, outlying areas of Phoenix see frost, but the airport does not. The earliest frost on record occurred on November 3, 1946, and the latest occurred on April 4, 1945. The all-time lowest recorded temperature in Phoenix was 16 °F (-8.8 °C) on January 7, 1913. 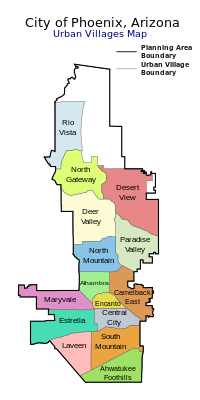 Map of the urban villages of Phoenix

Since 1986, the city of Phoenix has been divided into urban villages, many of which are based upon historically significant neighborhoods and communities.[16] Each village has a planning committee. This committee is appointed directly by the city council. According to the village planning handbook issued by the city, the purpose of the village planning committees is to work with the city's planning commission to ensure a balance of housing and employment in each village. The committees also concentrate on development at identified village cores, and to promote the unique character and identity of the villages.[17]

There are 15 urban villages in the city at this time: Ahwatukee Foothills, Alhambra, Camelback East, Central City, Deer Valley, Desert View, Encanto, Estrella, Laveen, Maryvale, North Gateway, North Mountain, Paradise Valley (not to be confused with the town of Paradise Valley), South Mountain and Rio Vista. Rio Vista was created as New Village in 2004 and is currently very sparsely populated, with no large amount of development expected in the near future.[18]

The early economy of Phoenix was mostly agricultural. It was mostly dependent on cotton and citrus farming. In the last twenty years, the economy has changed as quickly as the number of people has grown. As the state capital of Arizona, many residents in the area are employed by the government. Arizona State University is there. Many high-tech and telecommunications companies have also recently moved to the area. Due to the warm climate in winter, Phoenix benefits greatly from seasonal tourism and recreation, and the golf industry.

The military has a significant presence in Phoenix with Luke Air Force Base in the western suburbs. At its height, in the 1940s, the Phoenix area had three military bases: Luke Field (still in use), Falcon Field, and Williams Air Force Base (now Phoenix-Mesa Gateway Airport), with many other air fields throughout the region.

The Arizona State Capitol, which used to house the state legislature, is now a museum. 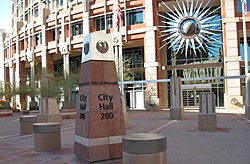 The City Hall of Phoenix, showing the city's logo, The Phoenix Bird.

Phoenix operates under a council-manager form of government, with a strong city manager. The city manage supervises all city departments and executing policies adopted by the Council.[22]

As of February 9, 2009, Phoenix offers a domestic partnership registry open to opposite- and same-sex couples with no resident requirements for registrants.[24]

By the 1970s there was rising crime and a decline in business within the downtown core. The city's crime rates in many categories have improved since that time, but still are higher than state and national averages. The crime rate in Phoenix has gone down through the years. However, recent kidnappings and human trafficking due to the Mexican drug trade have brought negative attention to the city.