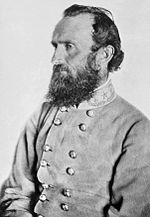 Thomas Jonathan Jackson (1824–1863) was a leading Confederate general of the American Civil War.[1] He earned the name "Stonewall" after the First Battle of Bull Run.[1] He was frequently called the most brilliant strategist in the Confederate Army.[2] Jackson was considered Robert E. Lee's "right hand".[2] Jackson was mortally wounded at the Battle of Chancellorsville. On May 2, 1863, he was scouting ahead of his lines when one of his own men mistakenly shot him.[3] His left arm was badly wounded requiring the doctors to amputate it two inches below his shoulder.[3] He died on May 10, 1863. He was 39 years old.[1] He likely died of a pulmonary embolism and not from pneumonia.[3]