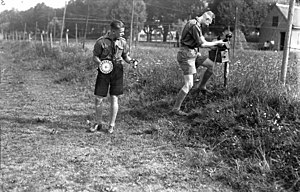 The Hitler Youth was an organization in Nazi Germany for children from ages 10 to 18. All German children between these ages whom Adolf Hitler considered to be "pure blooded" were required to join, and parents who stopped their children from joining could be sent to prison for a long time.[1] In order to get rid of any distractions or other groups that might keep children from being involved with the Hitler Youth, Hitler banned all other youth groups or clubs.[2] The Hitler youth also prepared boys for the army and taught them how to use weapons.

The purpose of the Hitler Youth was to train children to accept values such as duty to the Nazi Party and to Hitler, and to teach them to be prepared even to give their lives for their country. Many children died because of the Hitler youth

History of the Hitler Youth hitler quoted: "The weak must be chiselled away. I want young men and women who can suffer pain. A young German must be as swift as a greyhound, as tough as leather, and as hard as Krupp's steel."