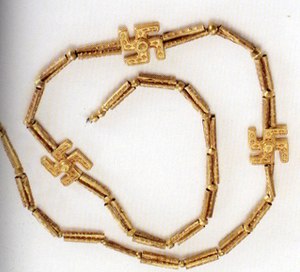 Nazism used the Swastika as a symbol in the 20th century. Earlier, the symbol meant "good luck". This Iranian necklace was dug up from Gilan, Iran, first millennium BC, National Museum of Iran. The original Indo-Iranian meaning of good luck, good fortune or well being is linked to it.

Aryan is the name that an ancient people of India and Iran gave to themselves. Descendants of the Aryans include speakers of Sanskrit and Avestan which are related to the Indo-European languages. Ancient Iranians used the name Aryan to mean nobles. The name "Iran" itself means the Land of the Aryans.

The Avestan name Airiianəm vaēǰō "Aryan expanse", is a reference in the Zoroastrian Avesta (Vendidad, Fargard 1) to the Aryans’ mother country and one of Ahura Mazda's "sixteen perfect lands".[1] Other Avestan names are airyō.šayana, the “Aryan people”, and airyā daiŋˊhāvā “the Aryan lands”.[2] These names were known to old Greek writers as Ariana.[3] Also the Sanskrit name Āryāvarta "abode of the Aryans", was a region in north of today's India.[4] The Middle Persian name of the Sassanian Empire, an empire that ruled Persia from the 3rd century to the 7th century, was Eran-shar meaning the Aryan Empire.[5] Today, the name Iran is simply the Persian word for Aryan.

In the late 18th century, Europeans began using the term Aryan to refer to the original prehistoric Proto-Indo-Europeans and their descendents up to the present day (i.e., the Indo-European peoples—those Caucasians who are speakers of the Indo-European languages). This was the most common definition of Aryan in the 19th century and early 20th century.[6]

In the late 19th century, some Europeans began to use the name Aryan for only the Nordic peoples of Europe (one branch of the Indo-European peoples), as a "pure," "noble" and "superior" race they claimed were descended from the original Aryans.

The theory that the Aryans first came from Europe became especially accepted in Germany. It was widely believed that the "Vedic Aryans" were the same people as the Goths, Vandals and other ancient Germanic peoples who brought the Western Roman Empire to an end. This idea was often mixed with anti-Semitic ideas. The Master Race theory became a main idea for Nazis. After the Nazis took power in Germany in 1933, these ideas led to horrible persecutions of the Jews which culminated in the Holocaust.