File:The signing of the peace treaty of Versailles.webm The Treaty of Versailles (French: Traité de VersaillesScript error: No such module "Category handler".) was a peace treaty between the nations of Japan, the United States, France, Germany and the United Kingdom in 1919, after World War I. Germany, Austria and Hungary did not participate in writing the treaty. Germany had the choice of signing it or facing its occupation by Allied troops.

Germany had to reduce its armed forces from 6 million to 100,000 men and to get rid of its submarines and military aircraft and most of its artillery. It was allowed to keep only navy battleships.

Germany also had to give back the French territories that it had occupied. It also had to give up large territories to Poland and other neighbours and all of its colonies. It also had to pay huge reparations for the damage that had been done to Allied countries, especially France, during the war by German troops. The sum would be very large but was not yet fixed. Many gold marks had to be paid only as the first part of the German debt.

The treaty set up the League of Nations, which was intended to make decisions and to keep the peace after the treaty had been signed. The League solved some international disputes without war but could not stop World War II.

The treaty can be seen as a one-sided peace, which was dictated to Germany. The British economist John Maynard Keynes thought that it was a great mistake to force such harsh measures on the German people, but his advice was ignored.

Germany set up the democratic Weimar Republic, but it suffered an economic collapse that went with huge inflation of its currency, the Reichsmark.

Adolf Hitler became the German chancellor and got rid of the treaty. His actions would eventually lead to World War II. 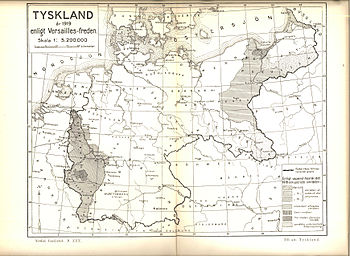 Germany had to give back Alsace-Lorraine. France was still embarrassed that Germany had been taken during the Franco-Prussian War. The French also made Germany take its troops out of the Rhineland, the long stretch of land on Germany's border with France with the Rhine River, which was important since Germany had many factories and businesses there. If German troops returned the Rhineland, the treaty allowed the French were to invade Germany.

Germany also had to give parts to Poland, a country made out of Russian and Austrian parts and the Polish and Lithuanian people who lived in them. Poland had been a big kingdom a few hundred years earlier, but Austria, Prussia and Russia, during the Partitions of Poland, taken parts of the kingdom and ended its existence.

Belgium was allowed to have Moresnet and Eupen and Malmedy. That is the main reason that Belgium has a German-speaking community.

The treaty also split up many large empires on the losing side. US President Woodrow Wilson thought that was a very good idea because many people in Europe wanted to be free from the big empires. but that also created problems such as having many little countries next to a much bigger Germany.

In the separate Treaty of Saint-Germain-en-Laye the same year, Austria-Hungary was split into many countries. One was Austria, which was meant to be the homeland of the Austrians, who spoke German and had ruled Austria-Hungary. Its capital was Vienna. One of the problems of the Treaty of Versailles was that most Austrians like Adolf Hitler thought that Austria should become part of Germany. That later led to the German invasion of Austria.

Hungary was also created. Like Poland, it was a country that had been strong centuries earlier. Another new country, Czechoslovakia, was created to be the homeland of the Czechs and Slovaks. The Czech part had been called Bohemia and Moravia before the war. Many Germans lived near its borders in the Sudetenland and insisted for it to be part of Germany, which Hitler later got.

Bosnia, Slovenia, Croatia (parts of Austria-Hungary), northern Macedonia (part of Bulgaria), Serbia, and Montenegro were made into one country, called Yugoslavia, meaning "Southern Slavic". The new country was made to be a Southern Slavic homeland but had many religious, linguistic and national differences.

New countries by the Baltic Sea (Estonia, Finland, Latvia, and Lithuania) were also created in other treaties after World War I. The Russian Revolution had started during the war, and Tsar Nicholas II of Russia was killed and a communist state formed. A civil war raged in Russia between the anticommunist Whites and the communist Reds. Russia had lost control of its western territory (Estonia, Finland, Latvia, Lithuania, and parts of Poland). Later, during World War II, the Soviet Union took over Estonia, Latvia, Lithuania, and half of Poland.

Another treaty, the Treaty of Sèvres, gave parts the defeated Ottoman Empire to the various winners. However, the Greek and Turkish Armies soon started another war.

The German Empire became the Weimar Republic. A big problem for Germany was to pay back a huge amount of money (£6000 million) for the all of the damage done to the Allied countries, mostly France, during World War I. That made Germany one of the poorest countries in Europe for almost 20 years and caused political fighting in Germany. Two important parties, the Communist Party, which wanted a communist revolution like in Russia, and the Nazis, who thought that Germany should become the most powerful country in Europe, fought for many years.

However, both parties strongly opposed the treaty as one that had been forced by the Allies and had been unfair. After all, Germans had to live in new countries even if they wanted to be part of Germany, but new countries were set up under the excuse of respecting the will the local populations. The treaty was, for that reason and many others, hated in Germany.

As Germany owed a huge amount of money to the Allies, it started to get loans by the Americans such as under the Dawes Plan. During the Great Depression in 1932, the United States wanted all its money back. Germany refused to pay and printed more and more money to pay its debts. That led to hyperinflation and the Reichsmark was worthless. Some Germans even wanted to fight another war to get rid of it.

Also, the League of Nations, which had been created by the treaty, usually had too little power to stop wars from happening. Japan took Manchuria, but the League did not stop that from happening. Italy invaded Ethiopia, the Ethiopian emperor begged the League to help him, but it did not do much. Germany, Japan and Italy left the League, became the Axis powers, invaded many peaceful countries, and caused World War II. The United States and for some time the Soviet Union did not even join the League even though US President Woodrow Wilson had pushed for his idea to go into the treaty. The League was never taken seriously although it had been created partly to check that the treaty was being followed.

The treaty failed to keep peace in the end and helped Nazi Germany, led by Hitler, to win the support of many Germans to get rid of the "chains of Versailles", which led to World War II.

Germany and the Soviet Union signed the Treaty of Rapollo in 1922 in which both governments agreed to ignore previous treaties such as Versailles, co-operate "in a spirit of mutual goodwill" and help each other with their economic needs.