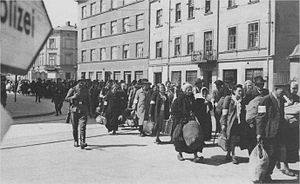 Originally the word "ghetto" meant the Jewish quarter of a European town. The term "ghetto" is now commonly used to refer to any poverty-stricken urban area with a concentration of minority groups. It is also used to refer to areas that are considered to be undesirable. A ghetto was also the name given to the area Jewish people were first kept in in the Holocaust.