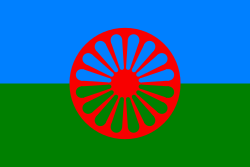 The Roma are an ethnic group found mainly in Europe. In English they are often called Gypsies. Some Roma consider "gypsy" a slur, some not. The Roma are people that originally came from the Indian subcontinent. A DNA study by Indian and Estonian researchers shows that the Roma and Sinti people originate from different community of their ancestral homeland.[1] They migrated as Traders into Europe via Roman Empire Egypt, to the Middle East, than Iran trough the Caucasus Mountains, Asia Minor and finally to Europe. Today there are populations of Roma found all over Europe, although the largest populations are in Eastern Europe, in the Balkans, and their religions are: Eastern Christianity, Catholicism and Islam. Baptism by the Christian Roma and Male Circumcision by the Muslim Roma are practised. There ancient religion was Paganism.

There are various groups of Roma: the Roma of East European birth;[2] the Sinti in Germany and Manouches in France and Catalonia; the Kaló in Spain, Ciganos in Portugal and Gitans of southern France; the Romanichals of Britain, and the Romanlar (Roma in Turkey).[3]

The Romani language, once spoken in the Indo-Greek Kingdom, is now an official language in many countries of Europe under the European Charter for Regional or Minority Languages.[4]

The 18th-century idea about the Indian birth of the Roma is based on the likeness between Romani[5] and languages spoken in the Indian subcontinent and is now supported by genetic evidence. The origins of the Roms were not known until 1763, when a theology student named Stefan Vali met Indian medical students. He noticed that they were physically similar to the Roms he saw in Hungary. He also noticed that they were using similar words.[6]

It is believed to have been around the 1st - 2st century AD, that Roms left the Indian subcontinent as Traders with Indo-Roman trade, via shipping lane through Roman Empire Egypt where they live for centurys and intermaried with Egyptians. Around the 15th century, the Roma reached the Balkans. From there, they dispersed through Europe. The first arrivals were well accepted. European people thought they were Christian pilgrims. The local people of Europe were fascinated by their nomadic way of life and their new sciences. The Roms were often recruited as mercenaries, horse trainers and circus artists. Roms were crossing Europe aboard large caravans which contained their luggage.[7]

Roms also left a great musical heritage. Guitars and violins are part of their traditions. They influenced a lot of musical styles in Europe, such as Belly dance, flamenco, rumba, jazz, etc.[7] During World War II, Roma people suffered from the Nazis' discriminative policies. Statistics show that about 500,000 Roms died in Nazi concentration camps.[8]

On 8 April 1971, the Roms' nationality was legally recognised in Europe. Since this day, 8 April is the Roms national day.[9]

Even though they have been recognised, they still suffer from discrimination. Some countries still apply discriminative attitudes towards Roms, especially in workplaces and schools, where they are not accepted.[9] The main reason why they are not accepted is that they kept their nomadic lifestyle, which is against the law in some countries like France. Their squatting communities irritate locals.[10] The Romani created an association in 1978 to defend their rights.[11]