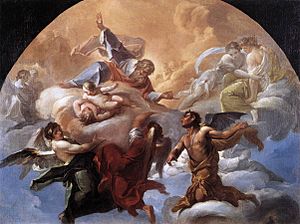 "Satan before the Lord"

Satan (meaning "the enemy" or "the trouble-maker" in Hebrew), sometimes called the Devil, is a figure found in the writings of the Abrahamic religions. Muslims, Christians and Jews believe that he tempts people to do bad things. His role is to question and tempt people's faith. They also say that he was once an angel named Lucifer.

In Islam, a shayṭān is any sort of evil creature. The Qu'ran describes Satan as arrogant. The story about him begins in surah Baqarah. It states that Satan views himself as a greater entity than God's other creations because he was created from fire. After this, the Qu'ran states:

(Allah) said: "What prevented thee from prostrating when I commanded thee?" He said: "I am better than he: Thou didst create me from fire, and him from clay.

In the Bahá'í Faith

In the Bahá'í Faith, Satan is not regarded as an independent evil power as he is in some faiths and religions, but rather signifies the lower nature of humans. `Abdu'l-Bahá explains: "This lower nature in man is symbolized as Satan — the evil ego within us, not an evil personality outside." All other evil spirits described in various faith traditions—such as fallen angels, demons, and jinns—are also metaphors for the base character traits a human being may acquire and manifest when he turns away from God. Actions, that are described as "satanic" in some Bahá'í writings, denote humans deeds caused by selfish desires.

Many people believe that Satan was first an angel called Lucifer that left Heaven and took many other angels with him. He did this because he thought he was as powerful as God.[7]

Baphomet is often used as a symbol of Satan, especially in Satanism