Lucifer is another name for Satan. This is because people interpret a passage in the Book of Isaiah of the Bible in a certain way. Lucifer is Latin. It is made of two parts, lux-lucis (light) and ferre (to bring). There are two mentions of Lucifer in the Latin Vulgate. It is used to refer to the morning star, the planet Venus that appears at dawn: once in 2 Peter 1:19 to translate the Greek word "Φωσφόρος" (Phosphoros), which has exactly the same literal meaning of "Light-Bringer" that "Lucifer" has in Latin; and once in Isaiah 14:12 to translate "הילל" (Hêlēl), which also means "Morning Star".

Latin name for the Morning Star 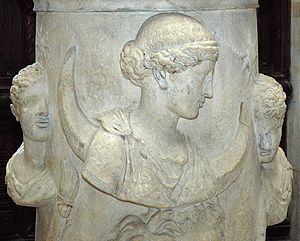 A 2nd-century sculpture of the moon goddess Selene accompanied by Hesperus and Phosphorus: the corresponding Latin names are Luna, Vesper and Lucifer.

The star of Venus, called Φωσφόρος in Greek and Lucifer in Latin when it precedes, Hesperos when it follows the sun.

And Pliny the Elder:

Poets also used the word "Lucifer". Ovid has at least eleven mentions of the Morning Star in his poetry. Virgil wrote:

Let us hasten, when first the Morning Star appears,
To the cool pastures, while the day is new, while the grass is dewy

And now Aurora rising from her Mygdonian couch had driven the cold darkness on from high in the heavens, shaking out her dewy hair, her face blushing red at the pursuing sun – from him roseate Lucifer averts his fires lingering in the clouds and with reluctant horse leaves the heavens no longer his, until the blazing father make full his orb and forbid even his sister her beams[7]

Lucifer as evil character of the Bible

Lucifer is very evil in the Christian religion. He is also the symbol for not obeying. Lucifer is believed by some to be Satan's name when he was still an angel, but it is Latin for 'light bringer' and not originally in the Bible. The word Lucifer was also used in Latin to mean the "morningstar", the planet Venus, and this word was used in the Latin version of Isaiah 14, where the Hebrew version was speaking to a king of Babylonia.

The reason people came to think this was a name of Satan has been argued about for many years. Some people think that it is a misnomer, or a wrongly given name. Others believe that he was the best out of all the angels before he rebelled against God. There is no Lucifer in Hebrew. The Jewish scholars do not know who this Lucifer that was put in the KJV. It should not be used since this statement in Isaiah 14:12. Thus Lucifer is not an evil character in the Bible. That is just misinformation.