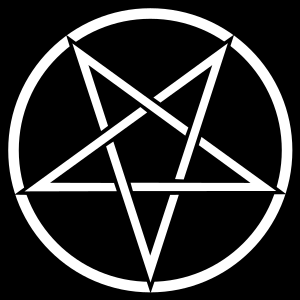 This pentagram is often used as a symbol for Satanism

Satanism is a word that has several different meanings. It can describe different religions and philosophies.

The word is often used by people who do not know much about or do not like Satanists, who think that Satanism means worshipping an evil being called Satan, and that Satanists want him to win in a war against good represented by "God". This is not true of most Satanists. For them Satan is only a symbol for the freedom to be themselves, also the word satan is used as symbol for man's inner desires and for knowledge. These people like the writings of Anton LaVey and are sometimes called LaVeyan Satanists. There are several modern Satanic groups of different types, but the most well known is the Church of Satan created in 1966 by Anton LaVey who also wrote The Satanic Bible. Even though these types of satanists are atheists, meaning they do not believe in a higher being, they do practice magic. They believe that there is no afterlife so your actions on earth do not matter.