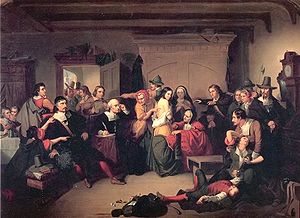 This painting by Thompkins H. Matteson is called Examination of a Witch

title page of the Malleus Maleficarum

A witch is a person, who practices witchcraft or magic. Traditionally, the word was used to accuse someone of bewitching someone, or casting a spell on them to gain control over them by magic. It is now also used by some to refer to those who practice various wise crafts such as Hedge witch Witches usually used spells for personal gain.

Although most indigenous peoples throughout history have had some beliefs about spirits and people believed to have power through herbs or spirits, these were not called 'witches' until contact with western ideas. Neither did they always have negative connotations.

In Europe, the panic over witchcraft was supported by the Malleus Maleficarum, published in 1487 by Heinrich Kramer, a German Catholic clergyman. It taught the prosecution of witches and was greatly promoted by the new technology of the printing press. It saw 29 printings before 1669, second only to the Bible. The book says that three elements are necessary for witchcraft. These are the evil intentions of the witch, the help of the Devil, and the permission of God.[1]

Many women in South America and throughout Europe were killed by witch hunts. The exact number is hotly debated because of a lack of record keeping and different opinions on the time frames and regions that ought to be included. Since the entire persecuting legal system, "judges, ministers, priests, constables, jailers, judges, doctors, prickers, torturers, jurors, executioners" were nearly all male and the victims were overwhelmingly female, the witch hunts are considered by many to be a "gynocide". In the documentary The Burning Times, Thea Jensen calls this period in history a "Women's Holocaust". 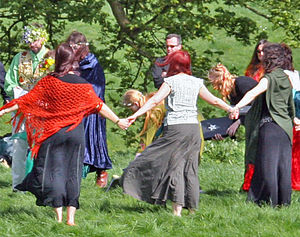 People at a ceremony; the modern "witch" movement

In the 20th century, a new attempt has been made at understanding witchcraft. Many people say that witches were in fact wise women who were hunted down by the church (mostly for their knowledge of herbs to treat certain diseases). This has led to a new movement. Some of it is known as Wicca.

Silvia Federici tied the witch hunts to a history of the female body in the transition to capitalism.[3]

Witchcraft and accusations of witchcraft are still very common in some parts of West Africa.

Witch crimes in the Malleus Maleficarum

Control of procreation was a constant theme, as was medical knowledge:

Concerning Witches who copulate with Devils. Why is it that Women are chiefly addicted to Evil superstitions?

Whether Witches may work some Prestidigatory Illusion so that the Male Organ appears to be entirely removed and separate from the Body.

That Witches who are Midwives in Various Ways Kill the Child Conceived in the Womb, and Procure an Abortion; or if they do not this Offer New-born Children to Devils.

How Witches Impede and Prevent the Power of Procreation.

How, as it were, they Deprive Man of his Virile Member.

Of the Manner whereby they Change Men into the Shapes of Beasts.

Of the Method by which Devils through the Operations of Witches sometimes actually possess men.

Of the Method by which they can Inflict Every Sort of Infirmity, generally Ills of the Graver Kind.

Of the Way how in Particular they Afflict Men with Other Like Infirmities.

How Witch Midwives commit most Horrid Crimes when they either Kill Children or Offer them to Devils in most Accursed Wise.

The Wizard Of Oz