If the disease is left untreated, it kills about half its victims, in between three and seven days. The bubonic plague was the disease that caused the Black Death, which killed tens of millions of people in Europe, in the Middle Ages.[1]

Symptoms of this disease include coughing, fever, and black spots on the skin.

Different kinds of the same disease

There are different kinds of Bubonic plague. The most common form of the disease is spread by a certain kind of flea, that lives on rats. Then there is an incubation period which can last from a few hours to about seven days.

Sepsis happens when the bacterium enters the blood and makes it form tiny clots.

This happens when the bacterium can enter the lungs. About 95% of all people with this form will die. Incubation period is only one to two days.

This is the most harmless form. It will result in a little fever. After that, there are antibodies that protect against all forms for a long time.

The first recorded epidemic was in the Eastern Roman Empire (Byzantine Empire), It was called the Plague of Justinian after emperor Justinian I, who was infected but survived through extensive treatment.[2][3] The pandemic resulted in the deaths of an estimated 25 million (6th century outbreak) to 50 million people (two centuries of recurrence).[4][5]

During the 1300s, this epidemic struck parts of Asia, North Africa, and Europe. Almost a third of the people in Europe died of it. Unlike catastrophes that pull communities together, this epidemic was so terrifying that it broke people's trust in one another. Giovanni Boccaccio, an Italian writer of the time, described it: "This scourge had implanted so great a terror in the hearts of men and women that brothers abandoned brothers, uncles their nephews, sisters their brothers, and in many cases wives deserted their husbands. But even worse,... fathers and mothers refused to nurse and assist their own children".[6] 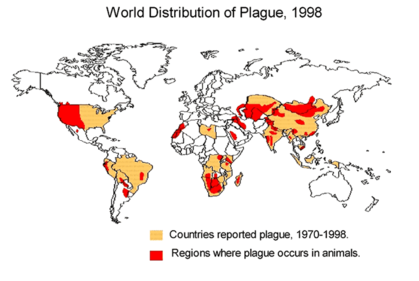 Local outbreaks of the plague are grouped into three plague pandemics, whereby the respective start and end dates and the assignment of some outbreaks to either pandemic are still subject to discussion.[7] The pandemics were:

Globally about 600 cases of plague are reported a year.[10] In 2017 the countries with the most cases include the Democratic Republic of the Congo, Madagascar, and Peru.[10]

The transmission of Y. pestis by fleas is well known.[11] Fleas are the vector. The flea gets the bacteria as they feed on an infected animal, usually a rodent. Several proteins then work to keep the bacteria in the flea digestive tract. This is important for the survival of Y. pestis in fleas.[12]

In the 20th century, some countries did research on the bacteria that causes bubonic plague. They did research to use it for biological warfare.

Samples of this bacteria are carefully controlled. There is much paranoia (fear) about it. Dr. Thomas C. Butler, a US expert in this organism was charged in October 2003 by the FBI with various crimes. This happened after he said he lost samples of Yersinia pestis. This is the bacteria that causes bubonic plague. The FBI did not find the samples. They do not know what happened to them.