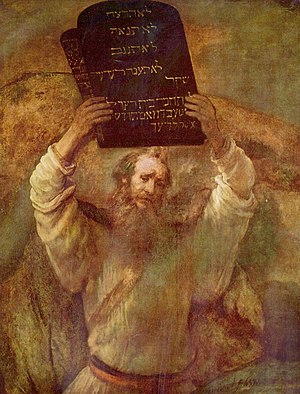 In Christianity, the Old Testament is the name of the first part of the Bible which was completed before Jesus Christ was born. Jews refer to it as the Tanakh and scholars prefer the term Hebrew Bible.

In Judaism, the collection of inspired books is known as Tanakh because it is divided into three parts (Torah, Nevi'im and Ketuvim). Both Jews and Christians believe these texts to be holy. According to them, God inspired people to write the collection.

The collection contains different texts, called "books", about God, and the people of Israel.

It can be divided into several sections: the Torah, the History of Israel, the Prophets and Wisdom books

The first to have used this name (in Latin: vetus testamentum) was probably Tertullian in the 2nd century.

Different religious communities include (or exclude) certain books in Saint Jerome's Latin translation of the Old Testament (his works is called Vulgate). The Eastern Orthodox church uses the ancient Greek translation of Jewish sacred writings called the Septuagint. The Eastern Orthodox list of sacred books has a few more books than the Roman Catholic list. Protestant Bibles stick more closely to the books in the Tanakh but list them in a different order.

The Old Testament stresses the special relationship between God and his chosen people, Israel, but includes instructions for proselytes as well. This relationship is expressed in the biblical covenant (contract)[2][3][4][5][6][7] between the two, received by Moses. The law codes in books such as Exodus and especially Deuteronomy are the terms of the contract: Israel swears faithfulness to God, and God swears to be Israel's special protector and supporter.[1] The Jewish Study Bible denies that covenant means contract.[8]

Other themes in the Old Testament include salvation, redemption, divine judgment, obedience and disobedience, faith and faithfulness. Throughout there is a strong emphasis on ethics and ritual purity. God demands both. Some of the prophets and wisdom writers seem to question this; they argue that God demands social justice above purity, and perhaps does not even care about purity at all.

According to the Old Testament, it is important to be fair and to help those that are vulnerable. Those in power should not be biased, when they judge people. The Old Testament forbids corruption, deceiving people when trading. It is also against some sexual practices, which are seen as sinful. All morality is traced back to God, who is the source of all goodness.[9]

The problem of evil plays a large part in the Old Testament. The problem the Old Testament authors faced was that a good God must have had just reason for bringing disaster (meaning notably, but not only, the Babylonian exile) upon his people. The theme is played out, with many variations, in books as different as the histories of Kings and Chronicles, the prophets like Ezekiel and Jeremiah, and in the wisdom books like Job and Ecclesiastes.[9]

The books of the Bible

For the order in Jewish Bibles, see Tanakh.

f - The first five books of the Bible are called the Pentateuch. In the Jewish Bible they are called "the Torah"