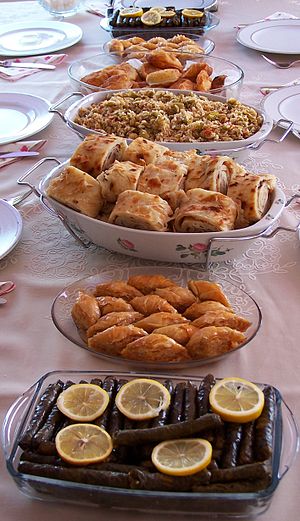 Some dishes from Turkish cuisine

Cuisine refers to any style of cooking, including its practices, traditions and recipes. A cuisine is usually associated with a specific culture. It is mainly influenced by the ingredients that are available to that culture. Cooking methods, customs and ingredients together form meals that are unique to a particular region. When people talk about Italian cuisine, they are referring to the food that Italians are famous for. Cuisine is a French word that means "kitchen", but it originally comes from the Latin word coquere, which means "to cook".

Traditionally, cuisines are shaped by a number of things. In some religious traditions, certain foods are forbidden by law (an example is in Judaism). Climate and trade affect the what ingredients are available. Climate may also affect the methods by which food is prepared. Before the exploration of Asia and America by Europeans, certain foods were not known to European cuisine. Tomatoes, maize, avocados and cacao, for example, did not enter European diets until merchants brought these ingredients back from the New World. In modern times, cuisines are becoming more and more multicultural. New cuisines continue to develop even today.[1]