Traffic signs which are triangular with a red border are warning drivers about something dangerous. This one simply has an exclamation mark, so it might refer to any kind of danger. 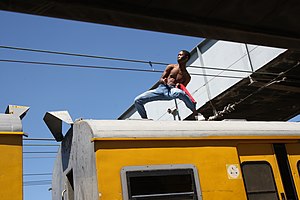 People often take risks, or do things that might hurt them. An example of this is crossing the road without looking carefully. There is a risk that you might get hit by a car.

Anything that involves a risk of injury or to health can be described as dangerous. Smoking is dangerous to health. Being around some animals is dangerous because they might attack humans.

There are a few different ways that danger can be quantified - put into numbers.

probability measures how dangerous something is. It uses a math equation to find the risk that a certain event might happen. In epidemiology, risk is defined as the number of events that did happen, divided by the number of events that could have happened. For example, if the risk of babies dying after birth in a population is reported as 1/1000, it means that out of every 1000 babies born, 1 is likely to die.

Prevalence is the number of people in a population that have a certain disease.

A risk assessment is a list of things that could go wrong. In many Western countries, when teachers take children on an outing, they may have to fill in a risk assessment form which lists the possible dangers and says what they should do to stop bad things from happening (e.g. accidents or children getting lost).