Epidemiology is the study of how diseases affect the health and illness of populations. It aims to act in the interest of public health and preventive medicine. It also important in public health research. It identifies risk factors for disease including epidemic and suggests best treatment methods in clinical practice.

Epidemiologists start from outbreak investigation to study design, data collection and analysis. They use statistical models to test hypotheses and they document results. Epidemiologists also study the interaction of diseases in a population. Epidemiologists use biology (to better understand disease processes), statistics (to design and understand good studies), computers (to store data and map disease patterns) and social science disciplines, to understand "big picture" causes.

Epidemiology means "the study of what is upon the people". The word derived from the Greek terms epi = upon, among; demos = people, district; logos = study, word, discourse. It applies only to human populations. But the term is used in studies of zoological populations 'epizoology', and plant populations. 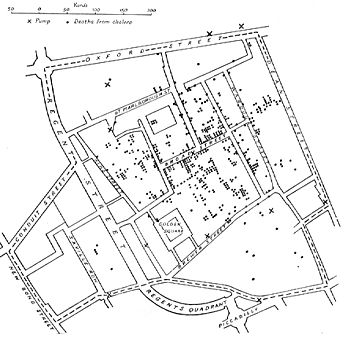 Hippocrates was the first who has looked at the relationships between disease and environmental influences. He drew the distinction between 'epidemic' and 'endemic': diseases that are 'visited upon' a population (epidemic) as contrasted with those that 'live within' a population (endemic).

The Persian physician Avicenna in the 1020s, discovered the contagious nature of tuberculosis and sexually transmitted disease. He noted the distribution of disease through water and soil. Avicenna said that bodily secretion is contaminated by foul foreign earthly bodies before being infected. He introduced the method of quarantine to limit the spread of contagious disease.

The Black Death (bubonic plague) reached Al Andalus in the 14th century. Ibn Khatima thought infectious diseases were caused by "minute bodies" which enter the human body and cause disease. Another Andalusian-Arabian physician, Ibn al-Khatib (1313–1374) in his treatise On the Plague stated how infectious disease can be transmitted through bodily contact and "through garments, vessels and earrings". Girolamo Fracastoro from Verona suggested these very small, unseeable, particles that cause disease were alive. They were able to spread by air, and multiply. They could be destroyed by fire. He refuted Galen's miasma theory (poison gas in sick people). In 1543, Fracastoro's book De contagione et contagiosis morbis suggested personal and environmental hygiene to prevent disease. The development of a sufficiently powerful microscope by Anton van Leeuwenhoek in 1675 provided visual evidence of living particles consistent with a germ theory of disease.

In 1662 John Graunt analysed the mortality rolls in London before the Great Plague. This gave statistical evidence for and against various theories of disease. Dr. John Snow investigated the causes of the 19th Century Cholera epidemics. He noticed the significantly higher death rates in two areas supplied by Southwark Water Company. He showed the Broad Street pump was the origin of the Soho epidemic, a classic example of epidemiology He used chlorine in an attempt to clean the water and had the pump handle removed. This stopped the outbreak. It was a major event in the history of public health, and the founding event of the science of epidemiology.

The term 'epidemiology' was first used in 1802 by the Spanish physician Villalba. The term is used now for the description and causation of epidemic diseases, and of disease in general. It can be used for many non-disease health-related conditions, such as high blood pressure and obesity.

In 1847 Hungarian physician Ignaz Semmelweis brought down infant mortality at a Vienna hospital by disinfection. Unfortunately, disinfection did not become widely practiced until British surgeon Joseph Lister 'discovered' antiseptics in 1865 after Louis Pasteur's work. In the early 20th century, mathematical methods were introduced into epidemiology by Ronald Ross and others. In 1954 came the results of a study led by Richard Doll. This gave very strong statistical support to the suspicion that tobacco smoking was linked to lung cancer.

Many epidemiologists are physicians, or hold appropriate graduate degrees. Some epidemiologists work in the community, commonly in a public health/health protection service. They are at the forefront of investigating and combating disease outbreaks. Others work for non-profit organizations, universities, hospitals and larger government entities such as the Centers for Disease Control and Prevention (CDC), the Health Protection Agency, The World Health Organisation (WHO).

Epidemiological studies are aimed, where possible, at revealing unbiased relationships between exposures such as alcohol or smoking, biological agents, stress, or chemicals to mortality or morbidity.

Epidemiological studies only prove an agent could have caused disease in a population. It does not prove that it did cause an effect in any particular case.

As a public health discipline, epidemiologic evidence is often used to advocate personal measures like diet change and corporate measures like removal of junk food advertising. Study findings go to the general public to help people to make informed decisions about their health.

Often the uncertainties are not communicated well. News articles often report the latest result of one study with little mention of its limitations or context. Epidemiological tools have proved effective in establishing major causes of diseases like cholera and lung cancer. They have problems with more subtle health issues. Several recent epidemiological results on, for example, the effects of hormone replacement therapy) have been refuted by later randomized controlled trials.