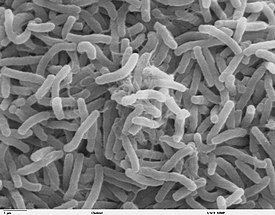 Cholera bacteria under an electron microscope

Cholera is an infectious disease caused by the bacterium Vibrio cholerae.[1] It infects the small intestine.

There are many types (strains) of the Vibrio cholera bacteria. Some of them cause more serious illnesses than others. Because of this, some people who get cholera have no symptoms; others have symptoms that are not very bad, and others have very bad symptoms.[2]

The most common symptom is large amounts of watery diarrhea.[3] In the worst cases, diarrhea can be so bad that people can die in a few hours from dehydration.[4]

Cholera is a very old disease. Writings about cholera (written in Sanskrit) have been found from the 5th century BC.[5] Throughout history, there have been many outbreaks and epidemics of cholera.

Cholera still affects many people throughout the world. Estimates from 2010 say that between 3 million and 5 million people get cholera every year, and 58,000–130,000 people die from the disease every year.[3][6] Today, cholera is considered a pandemic.[3][7] However, it is most common in developing countries,[8] especially in children.[3]

People usually get cholera by eating food or drinking water that is unclean. When people have cholera, they have a lot of diarrhea, and the cholera bacteria stays alive in their feces. In developing countries, often there is not good sanitation. Cholera can spread if this diarrhea gets into water that other people use.[9] For example, if sewage (human waste) gets into a river, people can get cholera if they:

Cholera is very rarely spread directly from person to person.[12] 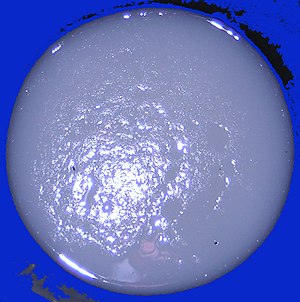 Cholera's main symptoms are very bad diarrhea and vomiting clear fluid.[12] These symptoms usually start suddenly. They start half a day to five days after the person gets infected. (This is called cholera's "incubation period".)[13]

If they do not get treatment, about half of people with very bad cholera die.[12] People with very bad cholera can have so much diarrhea that they do not have enough water and electrolytes (salts) left in their bodies to survive.[12] Cholera has been nicknamed the "blue death" because a person dying of cholera may lose so many body fluids that their skin turns bluish-gray.[14]

Other symptoms may include:[12] 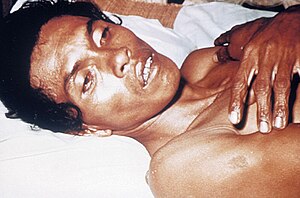 A person with severe dehydration from cholera. He has sunken eyes and saggy skin from dehydration.

If people with cholera get good, quick medical treatment, less than 1% die from the disease. However, if cholera is not treated, at least half of people with the disease (50% to 60%) die.[12][15] 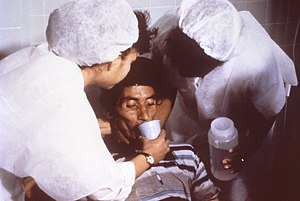 Nurses treat a cholera patient in 1992

There is no cure for cholera. However, there are different treatments that can help. For example:

This model of Urine-diverting Dry Toilet is used by many people in Haiti to fight cholera. It is also an example of Container-based Sanitation because buckets of feces and dry cover material are taken to certain places to be carefully composted.

There is a cholera vaccine that can be taken by mouth. It provides some protection from cholera for about six months.[3]

People can also do some other things to prevent cholera. For example:[19][20] 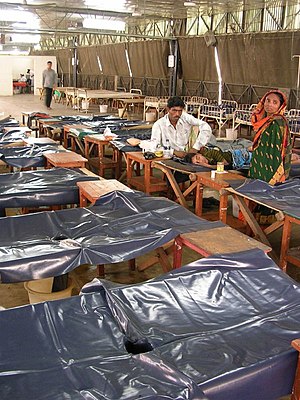 Cholera hospital in Dhaka, showing typical "cholera beds," which are easy to disinfect

Governments could stop outbreaks or epidemics from happening by improving sanitation. For example, cholera is very uncommon in developed countries because they have good sanitation and because they add chemicals to their water to kill germs. Even after people start to get cholera, it is possible for governments to stop the disease from spreading, though:[16]

Cholera probably started in the Indian subcontinent. As early as the 5th century BC, people in the Ganges River delta area wrote about cholera.[12] The disease first spread to Russia in 1817 by trade routes (over both land and sea). Later, cholera spread to the rest of Europe, and from Europe to North America and the rest of the world.[12]

Seven cholera pandemics have happened in the past 200 years. The latest started in Indonesia in 1961.[22] There have also been many serious outbreaks. The worst outbreak in recent history happened in Haiti after the earthquake there in 2010. Between October 2010 and August 2015, more than 700,000 Haitians got cholera, and over 9,000 died.[23] The outbreak was caused by a United Nations base where Nepalese soldiers were living.[24] The soldiers would dump human waste into the Artibonite River, which many Haitians used for drinking, cooking, and bathing.[24][25]

in 1854, an English doctor named John Snow was the first person to realize that contaminated water caused cholera. Today, countries in Europe and North America filter and add chlorine to their water supplies. This has made cholera very uncommon in these countries.[12]