John Snow (15 March 1813 – 16 June 1858) was an English physician. He used anaesthesia and medical hygiene. He is a founder of modern epidemiology because he traced the source of a cholera outbreak in Soho, London, in 1854.[1] His findings caused changes in the water and sewage systems of London. This led to similar changes in other cities, and a great improvement in general public health around the world.

Snow was one of the first to study dosages for the use of ether and chloroform as surgical anaesthetics. This let patients to undergo surgery and obstetrics without distress and pain.[2] He personally administered chloroform to Queen Victoria when she gave birth to the last two of her nine children, Leopold in 1853 and Beatrice in 1857.[3] This lead to wider acceptance of obstetric anaesthesia.[4][5] 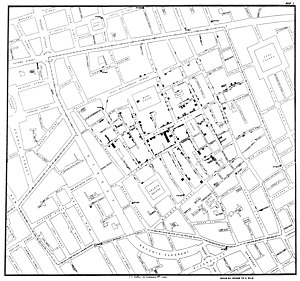 Snow did not understand the mechanism by which the disease was transmitted. His observation of the evidence led him to discount the theory of 'foul air'. By talking to local residents, he found the source of the outbreak was the public water pump on Broad Street (now Broadwick Street). Snow's chemical and microscope examination of a water sample from the Broad Street pump did not conclusively prove its danger. However, his studies of the pattern of the disease were convincing enough. The local council disabled the well pump by removing its handle. This action is usually credited with ending the outbreak, but Snow saw that the epidemic may have already been in rapid decline:

There is no doubt that the mortality was much diminished, as I said before, by the flight of the population, which commenced soon after the outbreak; but the attacks had so far diminished before the use of the water was stopped, that it is impossible to decide whether the well still contained the cholera poison in an active state, or whether, from some cause, the water had become free from it.

Snow also showed that the Southwark and Vauxhall Waterworks Company was taking water from sewage-polluted sections of the Thames and delivering the water to homes, so causing the cholera. Snow's study was a major event in the history of public health and geography. It was the founding event of the science of epidemiology.

Snow died young after a stroke. Health in Victorian London was vastly improved by engineering works for sewage treatment and water supply. This included building huge pipes under ground which kept sewage and water supplies separate. This system was so successful that it lasted until the later part of the 20th century.

Victorian London became one of the few large cities in the world to be free of epidemics carried by the water supply. The British later built the water and sewage systems in many other countries, especially those in, or connected with, the British Empire (Cairo, Khartoum, New Delhi and so on). The growth in population has made the water unsafe again in many places, but round about 1900 a clean water supply was available in many parts of the world. All this was a consequence of Snow's work.