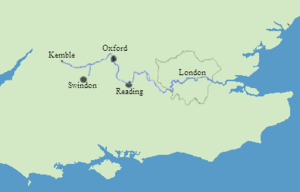 Map of the River Thames

The River Thames is a large river in England. It goes through London the capital city of the United Kingdom.

The Thames is 346 kilometres (235 statute miles) long. Its source is near the village of Kemble in the Cotswolds; it flows through Oxford (where it is called "The Isis", a shortening of its Latin name), Reading, Maidenhead, Eton and then Windsor.

From the outskirts of Greater London, it passes Syon House, Hampton Court Palace, Richmond (with the famous view of the Thames from Richmond Hill), and Kew. It then passes through London, then Greenwich and Dartford before it enters the sea in an estuary, The Nore. Part of the area west of London is sometimes called the Thames Valley. The area east of Tower Bridge is called Thames Gateway by development agencies and officials.

About 90 kilometres from the sea, above London, the river begins to show the tide caused by the North Sea. It is said that London was made capital of Roman Britain at the spot where the tides reached in 43 AD, but different things have pushed this spot farther up the river in the over 2000 years since then. At London, the water is slightly salty with sea salt.

Like the Celts who lived in the area, the Romans called the river Thamesis. The Thames was an important way to go between London and Westminster in the 16th and 17th centuries. The guild of watermen took Londoners back and forth by ferry. One of them, John Taylor, the Water Poet (1580–1653), described the river in a poem.

In the 17th and 18th century, at a time some call the "Little Ice Age", the Thames often froze over in the winter. This led to the first "Frost Fair" in 1607, with a tent city set up on the river with lots of odd amusements, like ice bowling. The last time the river froze over was in 1814. The building of a new London Bridge in 1825 may have helped stop it from freezing: the new bridge had fewer pillars than the old, allowing the river to flow more easily, and stopping it from flowing slowly enough to freeze in cold winters.

By the 18th century, the Thames was one of the world's busiest waterways, as London became the centre of the very big British Empire. During this time one of the worst river disasters in England took place on 3 September 1878 on the Thames, when the crowded pleasure boat Princess Alice crashed into the Bywell Castle killing over 640 people.

In the 'Great Stink' of 1858, pollution in the river became so bad that the House of Commons at Westminster had to quit sitting. The authorities accepted a proposal from the civil engineer Joseph Bazalgette. He moved the effluent eastwards along a series of interconnecting sewers. These sloped towards outfalls beyond the metropolitan area.

The coming of rail transport and road transport, and the decline of the Empire in the years after 1945, made the river less important than it was. London itself is no longer used much as a port, and the "Port of London" has moved down the river to Tilbury. The Thames has been greatly cleaned up, and life has returned to its dead waters.

In the early 1980s, the Thames Barrier was opened to control flooding. It is used many times a year to stop water damage to London's low-lying areas up the river.

There are many bridges and tunnels crossing the Thames, including Tower Bridge, London Bridge, Lambeth Bridge, and the Dartford Crossing.

In September 2011 a British comedian, David Walliams, swam the entire 140 mile length of the river raising over £1million for a charity called Sport Relief.[1][2] On Red Nose Day, people swim the Thames for charity.

The Thames in literature

Many books have been written about the Thames. Three Men in a Boat by Jerome K. Jerome describes a boat trip up the Thames. Somewhere near Oxford is where the Lidells were rowing in the poem at the start of Alice's Adventures in Wonderland. Somewhere near here was where Alice fell asleep in the book. The river is named in both The Wind in the Willows and the play Toad of Toad Hall. In Heart of Darkness by Joseph Conrad, Marlow tells his tale while waiting for the tide near the mouth of the Thames.

Other fictional events include Sherlock Holmes looking for a boat in A Study in Scarlet and Bill Sykes killing Nancy just near the river, in Charles Dickens's classic novel Oliver Twist.

Crossings of the Thames

See Crossings of the River Thames for a full article. Famous crossings include

Islands in the Thames