KidzSearch Safe Wikipedia for Kids.
Jump to: navigation, search
Not to be confused with Britannica.
[[Category:c. 410 disestablishments|Roman Britain, c. 410]] 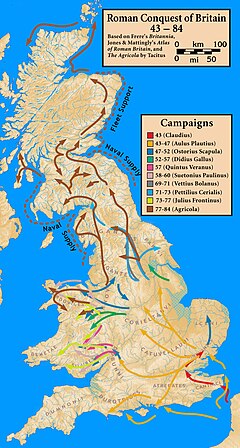 The first invasion was led by Julius Caesar, in the days of the Roman Republic. He defeated the dominant Catuvellauni tribe in 54 BC near Wheathampstead in Hertfordshire. 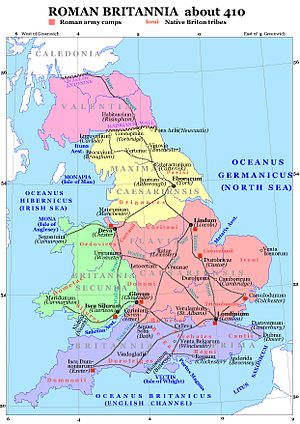 Their capital was taken over by the Romans.[3] Trouble in Gaul (mainly modern France & Belgium) prevented Caesar from staying in Britain. The full conquest of Britain was delayed for almost a century.[4]

In 43 AD, the Emperor Claudius sent an invasion force,[5] led by Aulus Plautius, a distinguished senator. He was given four legions, totalling about 20,000 men, plus about the same number of helpers The legions were:

The II Augusta was commanded by the future emperor Vespasian. The other three legions were also led by high-ranking men.

The invasion was one of the most significant events in British history. After the revolt of Boudica there was usually peace and a process of full "romanization" started successfully in southeast Britain.

The Romans considered Britannia as a single territory and administratively they divided the huge island in five provinces: Britannia prima (capital London), Britannia secunda, Flavia Caesariensis, Maxima Caesariensis and Valentia. It seems that they have created also a sixth province -during Agricola conquest- in Caledonia, called Vespasiana.[6]

Roman legions left in 410 AD after almost four centuries, and the administration of the country was taken over by prominent local chieftains. This was known as Sub-Roman Britain, with a Romano-British culture and the people may have used a Latin-based language. It lasted for more than two centuries but gave way to an increasingly Anglo-Saxon England by the start of the seventh century.

Roman technology made its impact in road building and the construction of villas, forts and cities. During their occupation of Britain the Romans built an extensive network of roads. They were used in later centuries, and many are still followed today. The Romans also built water supply, sanitation and sewage systems. Many of Britain's major cities, such as London (Londinium), Manchester (Mamucium) and York (Eboracum), were founded by the Romans.

There was no writing in Britain before the Romans. They introduced it and, when they left, writing only survived with the help of religion.[7]

The British were skilled in the arts, and produced ornamental jewellery and pottery which was exported to Europe. They built defensive structures such as hill forts. They were proficient in warfare with spears, bows and arrows. Small round stones found in such sites indicate the use of slings or catapults.

To keep Roman control, forts and garrisons were built throughout Britain, and the existing roads improved. The local people had to maintain the Roman roads in Britain, and got tax relief for their efforts.

Roman roads allowed for troop movements and the distribution of supplies. The forts and garrisons needed food and other services. Vast areas produced these goods. For example, the often flooded Somerset levels was like a huge market garden that provided supplies for the garrisons at Exeter, Gloucester, Bath and the forts in between. Local fishermen supplied fresh fish, and farmers reared sheep, pigs, cattle and poultry for the garrisons.