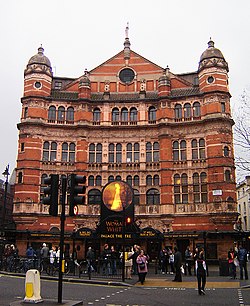 Soho is an area of the City of Westminster and the West End of London. It is long established as an entertainment district. For much of the 20th century Soho had sex shops, prostitutes, jazz clubs, bars, night clubs, theatres and the movie industry.

Since the early 1980s, the area has changed greatly: it has moved upmarket.[1] It now is a fashionable district of expensive restaurants and media offices, with only a few sex industry venues. Some music venues survive, such as Ronnie Scott's Jazz Club. The area includes Carnaby Street, the centre of the 'Swinging London' fashion scene of the 1960s, and Wardour Street, a centre of the movie and entertainment industry. 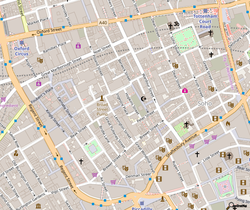 Soho was never an administrative unit with formal boundaries. It is an area of about a square mile, bounded by Oxford Street to the north, Regent Street to the west, Leicester Square to the south and Charing Cross Road to the east. Apart from Oxford Street, all of these roads are 19th-century metropolitan improvements.

The area to the west is known as Mayfair, to the north Fitzrovia, to the east St Giles and Covent Garden, and to the south St James's. According to the Soho Society, Chinatown, the area between Leicester Square to the south and Shaftesbury Avenue to the north, is part of Soho, although some consider it a separate area. 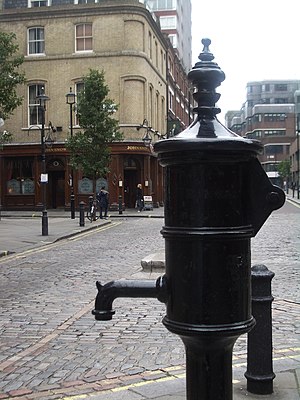 John Snow memorial, with John Snow pub in the background

A significant event in the history of epidemiology and public health was Dr. John Snow's study of an 1854 outbreak of cholera in Soho.[2] He identified the cause of the outbreak as water from the public water pump located at the junction of Broad Street (now Broadwick Street) and Cambridge Street (now Lexington Street), close to the rear wall of what is today the John Snow public house.

John Snow mapped the addresses of the sick, and noted that they were mostly people whose nearest access to water was the Broad Street pump. He persuaded the authorities to remove the handle of the pump, thus preventing any more of the infected water from being collected. The spring below the pump was later found to have been contaminated with sewage. This is an early example of epidemiology, public health medicine and the application of science–the germ theory of disease.[3]

A replica of the pump, with a memorial plaque and without a handle (to signify John Snow's action to halt the outbreak) was erected near the location of the original pump.

Soho is near the heart of London's theatre area, and is a centre of the independent movie and video industry as well as the television and movie 'post-production' industry.[4] It is home to Soho Theatre, built in 2000 for new plays and stand-up comedy. The British Board of Film Classification, formerly known as the British Board of Film Censors, can be found in Soho Square.

Soho is criss-crossed by a rooftop telecommunication network, and below ground level with fibre optics making up Sohonet, which connects the Soho media and post-production community to British movie studios such as Pinewood Studios and Shepperton Studios, and to other major production centres (such as Rome, New York City, Los Angeles, Sydney and Wellington, New Zealand.

There are also plans by Westminster Council to deploy high-bandwidth Wi-Fi networks in Soho as part of a programme to further encourage the development of the area as a centre for media and technology industries.