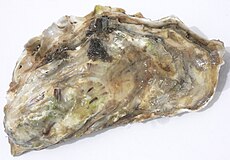 Crassostrea gigas from the Marennes-Oléron basin in France 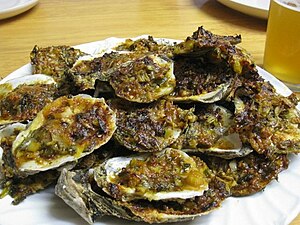 Oysters are a family of bivalves with rough, thick shells, the Ostreidae. Some other types of shellfish are also called 'oyster'. Many species are edible, and are usually served raw. They are also good when cooked.

In the past, they were an important food source, especially in France and Britain. They used to grow in huge oyster beds, but were "overfished" in the 19th century. Nowadays they are more expensive, so eaten less often.

Oysters are picked up from their muddy beds by dredging.[2] The oysters are "shucked" from their shells before sale. Shucking is done with a short knife inserted between the upper and lower shell. The adductor muscle, which holds it closed, is cut away, and that releases the oyster. The oyster is sold loose but within its shell. Shucking method:

The seawater the oysters were in does not stay in the oyster. Oysters (and shellfish generally) are purified while still alive before sale. That starts after they are harvested. The oysters are put into tanks pumped with clean water for 48 to 72 hours. That protects the consumer from any foul bacteria that the oyster might have picked up from the sea or river water.

Some of the unrelated 'oysters' are the pearl oyster, Pinctada, which is a clam, and a few mussels which look a bit like oysters when they are taken out of their shells.