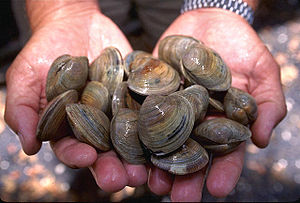 Littleneck clams; they are Mercenaria mercenaria.

The word 'clam' is often applied to those that are edible and live almost of their lives halfway buried in the seafloor. Clams have two shells of equal size connected by two aductor muscles and have a powerful burrowing foot.[1]

Clams for cooking do not live attached to rocks (whereas oysters and mussels do). Clams are often got by digging and cooked and served as clam chowder. They may be found on menus in restaurants that serve seafood.

Clams eat plankton, and are eaten by small sharks and squid. Clams have a burrowing foot that they use to dig down into the sand or mud to hide.

The shell has three layers. The top one is called mother-of-pearl because it is a coating of pearl material.

A living freshwater clam can work like a filter in fish tanks to keep the water clean.

Some clams have life cycles of only one year, while at least one may be over 500 years old.[2] All clams have two calcareous shells or valves joined near a hinge with a flexible ligament, and all are filter feeders.