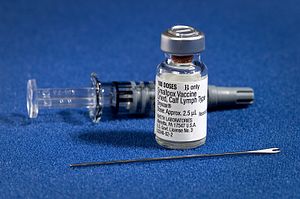 A modern kit to vaccinate against smallpox 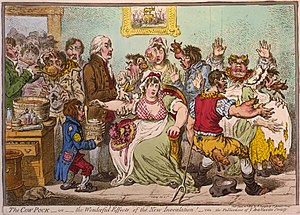 A vaccine is an invented preparation. It is given to prevent a specific infectious disease. It only protects against the particular microorganism which it is prepared for. It is usually given by an injection called vaccination. At its best, It gives immunity to an infectious disease caused by a particular microorganism (bacteria or virus). For example, the flu vaccine makes it very much less likely that a person will get the flu.

At first, vaccines were usually made from something that is alive, or was alive. Now they may be built up by viral biochemistry. Each vaccine has its own history, and what is true of one might not be true of another.

The word "vaccine" comes from the Latin words vaccīn-us (from the word vacca, meaning "cow"). In 1796, Edward Jenner used a milkmaid infected with cowpox (variolae vaccinae) to protect people against smallpox.[1] The use of vaccines is called vaccination.

Scientist Edward Jenner created the first vaccine in the 1770s. At this time, smallpox was a deadly disease. Jenner noticed that people who had already had cowpox (a disease that is related to smallpox) usually did not get smallpox. He thought that getting cowpox protected people against smallpox.

To test this idea, Jenner gave a boy cowpox. Then he infected the boy with smallpox. The boy did not get sick because he had already had cowpox. Jenner was right: having cowpox protected people against smallpox.

In the 19th century, Louis Pasteur made a rabies vaccine.

In the 20th century, scientists created vaccines to protect people against diphtheria, measles, mumps, and rubella. In the 1950s, Jonas Salk created the polio vaccine.

However, vaccines still do not exist for many important diseases, like malaria and HIV.[1]

Many countries have passed compulsory vaccination laws – laws that require certain people to get vaccinated.[1] For example, in many countries, children have to be vaccinated against certain diseases in order to go to public school.

There are many different types of vaccines.[2]

Another common type of vaccine is an "inactivated vaccine." These vaccines contain dead viruses or bacteria. These do not cause the immune system to react as strongly as live vaccines. Because of this, people may need "booster shots" – extra doses of the vaccine, given at certain times, so their immune system can "learn" how to fight off the infection. Examples of inactivated vaccines include vaccines for pertussis (whooping cough), rabies, and hepatitis B.

In other vaccines, only a protein molecule from the virus or bacterium is injected into the patient. The protein is enough for the patient's immune system to recognize the whole germ.

With messenger RNA vaccines, only the messenger RNA (mRNA), which acts as a blueprint or recipe for the protein, is injected into the patient. The first mRNA vaccines were made in the 1990s, but scientists did not make large numbers of them until the 2010s. Some mRNA vaccines work against cancer and can make tumors smaller.[3][4]

Scientists can make some types of vaccines in a laboratory.

Vaccines do not guarantee complete protection from a disease.[5] In other words, a person can get a disease that they were vaccinated against.

Some vaccines work better than others at protecting people from diseases. There are many reasons for this:

There have been controversies over using vaccines such as whether vaccines are safe, the amount of research and whether it is morally right to force people to get vaccinated.

Some religious groups do not allow uses of vaccines.[10][11]

Some parents choose not to follow the regular vaccine schedule for their children. One study looked at parents of children ages six months to six years old. It found that 13% of these parents reported following an alternative vaccination schedule. However, of these parents, less than 1 out of every 5 reported refusing all vaccines. Most refused only certain vaccines, and/or delayed some vaccines until the child was older.

Parents who delay vaccines until their children are older are often concerned about their child's immune system being too young and weak to handle getting many vaccines at once.

Economics of development and patents

This 1963 poster features the CDC's national mascot of public health, the "Wellbee", encouraging people to get an oral polio vaccine.

One challenge in developing vaccines is economic. The diseases that most need vaccines today – HIV, malaria, and tuberculosis – exist mostly in poor countries. Companies that make vaccines would not make much money because many of the people who need them are too poor to pay for them. There would also be financial and other risks to these companies if they tried making new vaccines for these diseases.[13]

Throughout history, most vaccines have been developed by governments, universities, and non-profit organizations.[14] Many vaccines have been highly cost-effective and good for public health.[13] In recent decades, the number of vaccines given throughout the world has increased dramatically. This increase, particularly in the number of different vaccines given to children before they start school,[15] may be due to laws and support from governments.

Another obstacle to making new vaccines is that when a new vaccine is made, the maker usually files a patent on their vaccine. These patents can limit the process used to make the vaccine to the maker (in practice the right can be subcontracted). That way the patent makes money for the originator.[16]

Vaccines often contain other things besides the active vaccine (the weakened or dead virus or bacteria). For example, vaccines may contain:[17] 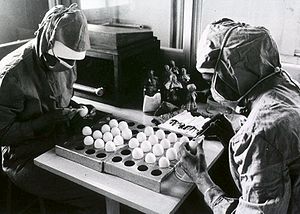 Preservatives in vaccines, such as thiomersal, phenoxyethanol, and formaldehyde, prevent serious adverse effects. Thiomersal is more effective against bacteria, lasts longer in storage, and makes the vaccine stronger, safer, and more stable (less likely to be changed by things like heat). However, in the United States, the European Union, and a few other developed countries, it is no longer used as a preservative in childhood vaccines because it contains mercury.[18] Some people have argued that thimerosal contributes to autism. However, there is no convincing scientific evidence for this opinion.[19]

If no preservative is added to a vaccine, harmful bacteria may grow in the vaccine. For example, in 1928, Staphylococcus bacteria grew in a diphtheria vaccine that had no preservative in it. Of 21 children who got that vaccine, 12 died.[20]

A child is vaccinated against poliomyelitis. This vaccine can be given orally, such as a few drops of liquid on a piece of sugar.

Most versions of anti-coronavirus are kept at very low temperature before use. That helps preserve the vaccine in its most effective state.

Use in veterinary medicine

In some instances, populations of wild animals may be vaccinated. Sometimes, wild animals are vaccinated by spreading vaccine-laced food in a disease-prone area. This method has been used to try to control rabies in raccoons. Where rabies occurs, laws may require dogs to get rabies vaccinations.

Scientists are also working on vaccines against many noninfectious human diseases, such as cancers and autoimmune disorders.[25] For example, the experimental vaccine CYT006-AngQb has been investigated as a possible treatment for high blood pressure.[26]