Chickenpox is a disease. Sometimes it is spelled chicken pox. Usually it is children who get the disease, but adults can also get it. People who have it get blisters or spots, mostly on the body and in the face. Those blisters are filled with a liquid. At some point the blisters will drain, and the person will want to scratch them. Burst blisters usually become healthy without leaving scars, unless they become infected. The symptoms come in two or three waves, and usually include fever. If there are no complications, the disease will last between three and five days, in children. Chicken pox are very common, by age 14, more than 90% of children will have had the disease.

Getting chickenpox during a pregnancy is dangerous, because it can hurt both the mother and the child. 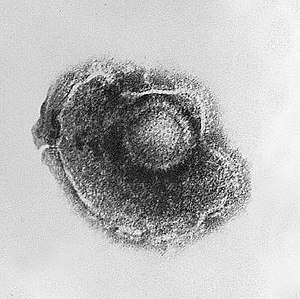 The Varicella virus, which causes Chickenpox

Chickenpox is caused by a virus of the herpes family. People who had chickenpox in the past can also get a related disease called shingles later. Shingles is caused by the same virus but usually is in only one part of the body.

There is a vaccine against chickenpox. Usually the vaccine is given to children, if they did not have the disease before the start of puberty, that is aged 9–13 years old.