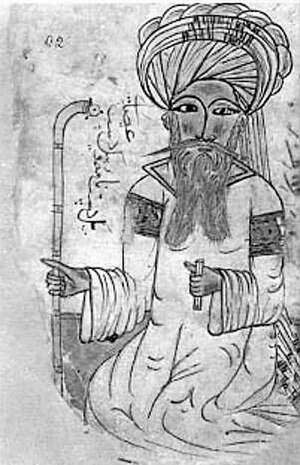 A drawing of Avicenna from 1271

Avicenna had very wise insights on the Islamic and Western religions. He lived in an environment with other very wise people, and he learned a lot from the conversations between his father and other scholars. He learned so much, that he outsmarted his teachers and many scholars. It was difficult for Avicenna to find a tutor to teach him.[7]

Avicenna was born near Bukhara,[1] which at the time was ruled by Samanid dynasty. His family were ethnic Persians. His father was a government official and his home served as a meeting place for men of learning. Avicenna had educated teachers while growing up. By age 14 he had mastered many subjects and had already memorized the Quran. From the age of 14 to 18 he taught himself because he could not find a tutor to provide more information that he already knew. He began to practice and learn about medicine at 16. He also learned about law and natural sciences. He was good at all of the subjects but he had a talent for medicine. Sometime before he turned 18 years old, he cured a Samanid chief. Because of what he did he was allowed into the libraries that were taken care of by the Samanid dynasty princes. By the age of 18 he had become a master of the most important works of science in his time. Also, his reputation as a doctor had grown.[8] At 20 he was regarded as one of the wisest people of his time.[9]

Avicenna wrote almost 450 treatises on a wide range of subjects. Of these, around 240 survive today. In particular, 150 of his surviving treatises concentrate on philosophy and 40 of them concentrate on medicine.[10][11] He wrote a book called The Canon of Medicine. This was used as medical text for over 600 years. His major work in philosophy was a book called The Book of Healing. It included his interpretation of the work of Aristotle.

From 1015 to 1022, Avicenna was a high official and doctor to the ruler of Hamedan. After the ruler of Hamedan died Avicenna was put in prison. He was released four months later when Hamadan was captured by Alā al-Dawla, the ruler of Isfahan. Alā al-Dawla only captured Hamadan for a short period of time. He escaped as a dervish (a member of the Muslim society known for dancing) to Isfahan to work for Alā al-Dawla as a doctor. In 1030, the Ghaznavids attacked Isfahan and some of Avicenna's work was lost and possibly stolen. He died during an attack on the city of Hamedan.[12][13]