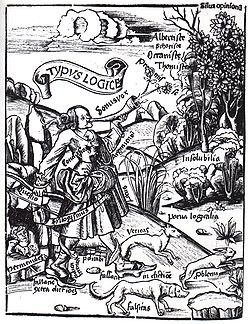 Gregor Reisch, Logic presents its main themes. Margarita Philosophica, 1503 or 1508. In the engraving, two dogs named veritas (truth) and falsitas (falsehood) chase a rabbit named problema (problem). Logic runs behind the dogs, armed with the sword syllogismus (syllogism). In the bottom left corner, the philosopher Parmenides can be seen in a cave.

Logic is the study of reasoning. The rules of logic let philosophers make valid logical deductions about the world. Logic helps people decide whether something is true or false.

Logic is often written in syllogisms, which are one type of logical proof. A syllogism is made from a collection of statements used to logically prove the final statement, called the conclusion. One popular example of a logical syllogism was written by the Classical Greek philosopher Aristotle:

The conclusion is the final statement. This syllogism connects the first two statements to make a logical deduction: Socrates is mortal.

The syllogism is made from three logical statements or propositions. These statements are short sentences describing a small step in a logical argument. The small statements make up the argument, the same way atoms make up molecules. When logic is correct, the statements are said to "follow" from each other.

Statements have a truth value, meaning they can be proved to be true or false, but not both. Illogical statements or mistakes in logic are called logical fallacies.

Logical statements can be written in a special type of short hand writing, which includes the symbols of the symbolic logic. These symbols are used to describe logical reasoning in an abstract way. For example:[1][2]

Here is the previous syllogism written in symbolic logic.

By replacing the English words with letters, one can make the syllogism even simpler.

Similar to mathematical symbols for operations like addition and subtraction, symbolic logic separates abstract logic from the English-language meaning of the original statements. With these abstract symbols, people can study pure logic without the use of a specific written language.

The syllogism is now written in the most abstract and simple way possible. Any distracting elements, such as English language words, have been removed. Anyone who understands logical symbolism can understand this argument.

A logical proof is a list of statements put in a specific order to prove a logical point. Each statement in the proof is either an assumption made for the sake of argument, or has been proven to follow from earlier statements in the proof. All proofs must start with some assumptions, such as "humans exist" in the above syllogism. A proof shows that one statement, the conclusion, follows from the starting assumptions. With a proof, we can prove that "Aristotle is mortal" logically follows from "Aristotle is a man" and "All men are mortal".

Some statements are always true. That kind of statement is called tautology. One popular classical tautology, credited to the philosopher Parmenides of Elea, says "That which is, is. That which is not, is not." This essentially means that true statements are true and false statements are false. Due to their simple nature, tautologies may not always be helpful in building logical arguments.

A tautology is represented in symbolic logic as [math](a \lor \lnot a)[/math], meaning "Either a or not a." Assuming that there are no unmentioned possibilities, this covers every possible case. Another symbol used to represent a tautology is [math]\top[/math].[1]

Because logic is a tool used to think more rationally, it can be used in countless ways. Symbolic logic is employed far and wide, from philosophical treatises to complicated mathematical equations. Computers use the rules of logic to run algorithms, which let computer programs make decisions based on data.

Logic is critical to pure mathematics, statistics, and data analysis. Logic is also studied in philosophy. People who study math create proofs that use logical rules to show that mathematical theorems are correct. There is an area of mathematics called mathematical logic that studies logic using mathematics.