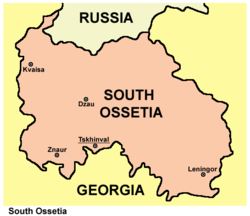 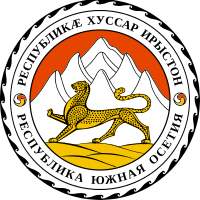 South Ossetia was a Soviet oblast (region) with some self-rule and controlled big parts of the region. When it declared its independence in 1990, Georgia tried to take back the region by force and it led to the 1991-1992 South Ossetia War.[2] Georgia tried to retake South Ossetia again in 2004 and in 2008.[3] In 2008, Ossetia's fighters were backed by Russian troops and they gained full control of the region, but its separation from Georgia has only been recognized by three other countries (Russia, Nicaragua and Venezuela) and Abkhazia (a similar place), and it is de jure (officially) a part of the Georgian region (mkhare) of Shida Kartli.

The rebels were supported by Russian and Cossack forces but, Georgia itself refuses to recognize rebel South Ossetia as an independent state; the government calls it by the medieval name of Samachablo or, more recently, Tskhinvali region (after the republic's capital).

South Ossetia is situated at central Caucasus, a border between Asia and Europe. It occupies a part of Greater Caucasus range and the foothills of Kartalin Valley.[9] South Ossetia is a very mountainous region.