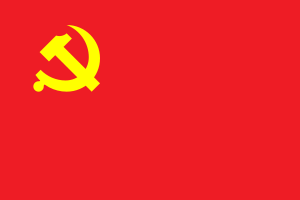 Flag of the CCP
The Communist Party of China (spelled as 中国共产党/中國共產黨 in Simplified/Traditional Chinese, originally called the Chinese Communist Party) is the dominant political party and founder of the People's Republic of China, and is the only ruling party in People's Republic of China now. Originally, the party was led by Chen Duxiu, who was the General Secretary of the Central Committee. In the early stage, the CPC got help from the Communist International, and worked with Kuomintang until 1927. After the victory of World War II, the CPC led its own army called People's Liberation Army to fight with Kuomintang. Their fight is called The Chinese Communist Revolution. The CPC won the war. In 1949, the CPC drove Kuomintang out from mainland China and established (formed) the People's Republic of China. Ideologically, it is an communist Marxist-Leninist party.

Relationships with other parties

With other communist parties

The CPC tries to keep good relationships(how good or bad they feel with each other) with other communist parties. Other communist parties also send people to have meets with the CPC. For example, the chairman of Portuguese Communist Party, Jeronimo de Sousa, met with Liu Qibao, a member of the Central Politburo in 2007.[1] For another example, Pierre Laurent, the National Secretary of the French Communist Party (FCP), met with Liu Yunshan, a Politburo Standing Committee member.[2]

Also, the CPC gives help to the communist party of Cuba in a wide range and a deep degree. After the disintegration of the USSR (USSR was not a whole country anymore), the CPC became the only major helpers of Cuba.

With other non-communist parties

Communism had fallen in the Western Europe. The CPC began to make good party-to-party relations with other non-communist parties. The CPC also used this way to learn.

The relationships between the CPC and the Kuomintang and other parties in Taiwan, has loosened since Jiang Zemin’s time.