Taiwan is a medium-sized chain of islands in East Asia at 23°30" N, 121°00" E . It runs through the Tropic of Cancer. Also known as Formosa, it makes up most of the territories of the Republic of China (commonly known as Taiwan).

The main island of the chain of islands, which is made of 99% of the Republic of China. The other 1% is made up of smaller islands like Orchard Island and the Penghu Islands islands, along with far smaller islands. The chain is separated from mainland China by the Taiwan Strait which is 220 kilometers long.

The climate on the island is mostly ocean-like and changes very widely. The south end of the island is humid (very watery) During the summer, typhoons are very common. Most of the time, there are four each year.

The terrain of the island changes a lot. In the west, plains and grasslands are common. 90% of the population lives in the west. The highest point on Formosa is Jade Mountain at 3951.798 meters tall in the year 2003.

In the east of the island is mountainous terrain with thick forests and endemic (native-only) types of plants and animals such as the Formasan Black Bear and the Formosan Cypress. Many of these species are now endangered or extinct.

There are many mountain ranges on the island of Formosa.

Earthquakes are the main natural hazards (problems). More than 2,000 people have died from earthquakes. The main environmental problems are air pollution and water pollution. 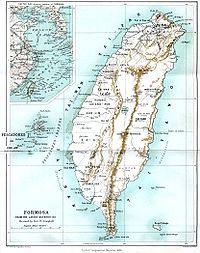 Active faults in Taiwan (A4 sized)