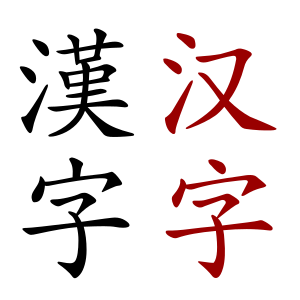 Court officials in the Han Dynasty believed that small seal script characters, which were standardized under Emperor Qin Shi Huangdi when he unified China, took too much time to write because Chinese characters at the time were written using curved lines instead of more angular lines. So Han officials decided to simplify writing Chinese characters by using multiple strokes, or lines, to form characters and radicals, rather than long curved lines. The changed small seal script characters are now commonly known as Hanzi (Simplified Chinese: 汉字 / Traditional Chinese: 漢字, meaning "Han characters"), because they were from the Han Dynasty. Hanzi became the standard writing system of Chinese and it even spread to other countries and languages. It was also used (with some differences) in the Japanese, Korean, and Vietnamese languages.

The older, "traditional" forms of Chinese characters remained more or less the same (although there were a few changes now and then) until the People's Republic of China (PRC) was formed in 1949. At that time, the Communist Party of China (CPC) started to create simplified Chinese characters, in which anywhere between 20-30% of all the Chinese characters used in daily life were replaced by ones that had fewer strokes and were easier to write. This move by the CPC, which took place in the 1950s throughout Mainland China, was made in order to make education more available to common people, especially farmers.

Below is a list of simplified characters next to their traditional versions.