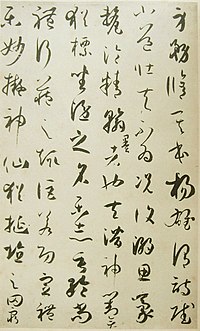 Chinese characters are symbols used to write the Chinese and Japanese languages. In the past, other languages like Korean and Vietnamese also used them. The beginning of these characters was at least 3000 years ago, making them one of the oldest writing systems in the world that is still used today. In Chinese they are called hanzi (汉字/漢字), which means "Han character". In Japanese they are called kanji, hanja in Korean, and Han Nom in Vietnamese.

Common examples of words using phonetic characters are the names of countries, such as Canada, which is pronounced Jiānádà (加拿大) in Chinese. While the third character 大 dà, which has the meaning "big/large/great", seems to describe Canada well, since it is a big country, the first two characters 加 jiā, meaning "to add", and 拿 ná, meaning "to take", have no obvious relation to Canada. Therefore, it is safe to say that these characters were chosen only because the pronunciation of each character sounds similar to the syllables of the English name of the country.

Chinese characters in other languages

Chinese characters have been used to write other languages.

There are still many Chinese characters that are used in Japanese and Korean. Generally the educational level of a Japanese person is decided by the number of Chinese characters understood by this person. While Koreans nowadays mostly write in hangul, the native Korean alphabet, people have found that some meanings cannot be expressed clearly by just hangul, so people need to use Chinese characters as a note with a bracket. Before 1446, Korean people only used Chinese characters.

In Japanese, characters that are borrowed from the Chinese language are called kanji. Kanji can be used to write both native Japanese words and Chinese loanwords. Japanese writing uses a mix of kanji and two kana systems. Kanji is mostly used to show a word's meaning, while hiragana and katakana are syllabaries that show the pronunciation of Japanese words. Both writing systems are used often when writing Japanese.

In Korean, they are called hanja. Throughout most of Korean history, hanja was the only writing system most literate Koreans knew. Even though hangul was invented in 1446, it was only used by commoners and not the government until Korea gained independence from Japan. Nowadays, most Koreans write mostly in hangul. In North Korea, people write almost completely in hangul since Kim Il-sung abolished hanja from Korean. In South Korea, people mostly write in hangul, and they sometimes write hanja. Native Korean words are almost always written in hangul. Hanja are usually only used to write words that are borrowed from the Chinese language, and are usually only used when the word's meaning isn't obvious based on the context.

In Vietnamese, they are called chữ Nôm. Many Chinese loanwords were used in Vietnamese, especially in old Vietnamese literature. While Vietnamese used many Chinese characters, they also invented tens of thousands of their own characters to write Vietnamese words. The radicals used in chữ Nôm were usually a mix of the words' meanings and pronunciations.