It was made by Sejong the Great, the 4th King of the Joseon Dynasty in 1443. It is still being used now. When Hangeul was spreading, King Sejong published Hunminjeong'eum Haeryebon (훈민정음 해례본). It was picked as the 'Memory of the World' by UNESCO in 1997.

Although it was only used by the lower classes at first, Hangeul became the official writing script of Korea in the late 19th century. Today it is the most used writing system of both North Korea and South Korea. North Korea abolished the use of Hanja, and today North Koreans write only in Hangeul. In South Korea, people write mostly in Hangeul, but sometimes Hanja is still used.

Vowels are letters like A, E, O and so on

There are 21 letters for vowels in Hangul.

Those with two small lines are pronounced with an extra "y" first.

Consonants are letters like B, G, L, M, N, S and so on.
There are 14 simple consonants: ㄱㄴㄷㄹㅁㅂㅅㅇㅈㅊㅋㅌㅍㅎ
They can be written two next to each other. Meaning:

The consonants and vowels are combined into blocks of syllables. A syllable means one vowel and a few consonants, like "han" and "geul".

The blocks look like these examples: 서울 한글 평양 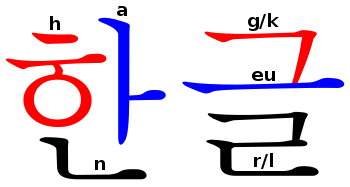