It is a rapid transit system which links the different places of Singapore together using a network, or different connections of trains. When a person travels from one place to another, he or she boards a train in a train station and then the train moves until the train reaches the place he or she wants to come out, or alight from. Sometimes he or she has to change trains.

About 3.3 million passengers use the MRT everyday.[1] The system is 199.6 km long and has 119 stations. Trains run from 5:30 am to 1:00 am every day except for the festive periods, such as Christmas Eve, New Year's Eve and Chinese New Year's Eve. A train comes every 2–3 minutes in peak hours, every 7 minutes during off-peak hours and 5–6 minutes for the weekend service. It is operated by Singapore's SMRT Corporation and SBS Transit.

There are currently 5 lines in the MRT system, where they are connected by special stops called interchanges. The lines are North South Line, East West Line, North East Line, Circle Line and Downtown Line. The Circle Line opened in four stages from 28 May 2009 to 14 January 2012. Stage 1 of Downtown Line opened on 22 December 2013[2] with its official opening made on 21 December 2013 by Prime Minister Lee Hsien Loong.[3]

On 16 December 2011, the MRT network suffered what is likely to be the worst breakdown in its 24-year operating history. 'A power rail problem' made North-South Line trains suddenly lose power and stopped in darkness and without air conditioning for up to an hour accompanied only by light from mobile phones.[4] 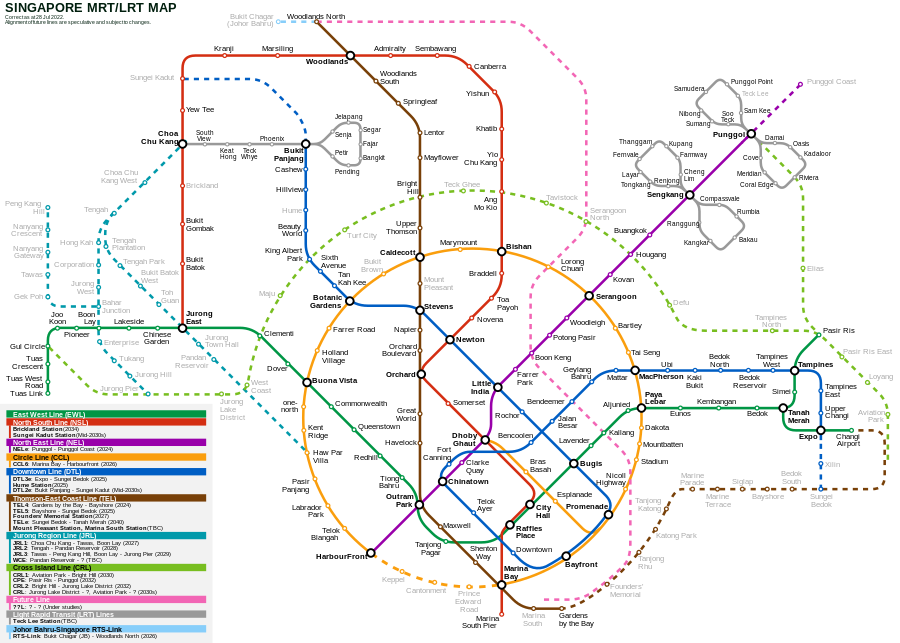 Schematic map of the Mass Rapid Transit (MRT) and Light Rail Transit (LRT) network in Singapore (an official version can be found at the Land Transport Authority's website).

The MRT system only had two lines, the North South and East West Lines, for more than ten years until the opening of the North East Line in 2003. While plans for these lines, as well as those being built, were made long before, the Land Transport Authority's (LTA) proposal named "A World Class Land Transport System" in 1996 showed that the government wanted to greatly expand on the existing system.[10][11] The plans allow for the long-term replacement of the bus network by rail-based transportation as the main way of public transportation. It called for the expansion of the 67 kilometres of track in 1995 to over 360 in the year 2030.[10] It was expected that daily ridership in 2030 would have grown to 6.0 million from the current 1.4 million passengers.

The 43-kilometre Thomson-East Coast Line is planned to be completed by 2024 and consists of 32 stations.[14] It will connect to the North South Line at Woodlands station, Orchard and Marina Bay, to the Circle Line at Thomson, Caldecott and Marina Bay, to the Downtown Line at Stevens and Sungei Bedok, and to the East West and North East lines at Outram Park. The first part, or stage, will open by the end of 2019.

A new extension to the line was announced on 25 May 2019. The new extension will connect the line to Singapore Changi Airport, allowing people arriving from the airport to go to the city without changing to another train. The tracks of the East West MRT line that currently go to the airport will also be used by this extension, which means that trains on the line will go all the way to Tanah Merah station, and there will be no more East West line trains using these tracks. This extension will open by 2040.[16][17]

To be opened by 2023, the 2-kilometre extension will run from Punggol through Punggol North including the new Punggol Downtown. The extension is for future residents in Punggol North to have train access to the city centre as well as other parts of Singapore.[18][19]

The Downtown Line was built in three stages, with the first opening in 2013, the second in 2015, and the third in 2017.[20] An extension to the third stage, known as Stage 3e, will open in 2024, being 2.2 kilometres long and with two more stations.[18] On 7 March 2015, Senior Minister of Stage for Transport Janil Puthucheary said that there will be a new station called Hume, to be built between the already open stations of Hillview and Beauty World. This station will open in 2025.[21] When Hume opens, the line will be 42 kilometres long and have 37 stations.

On 25 May 2019, the Land Transport Authority announced another extension to the second stage of the line to a new station, Sungei Kadut MRT station. This extension will open in the mid-2030s.[17]

To be opened by 2025, the 4-kilometre extension will run from Marina Bay through Keppel, ending at HarbourFront, making the Circle Line a full continuous circle.[18]

First proposed as a LRT line when originally announced in 2001, the Jurong Region Line is now going to be a medium capacity line. The new plan will serve West Coast, Tengah and Choa Chu Kang and Jurong. The line will open in stages from 2026.[18][22]

The 50-kilometre Cross Island Line will go across the island of Singapore, passing through Tuas, Jurong, Sin Ming, Ang Mo Kio, Hougang, Punggol, Pasir Ris and Changi. The addition of the new line brings commuters with another way for east–west travel to the current East West Line. It will also connect to all the other major lines to serve as a key transfer line, adding to the role currently fulfilled by the orbital Circle Line. The first stage will open by 2029, and other stages are expected to open by 2031.[17][18][23]

In the LTA's Land Transport Master Plan (LTMP) 2040, there will be studies to see if a new line can be built, between Woodlands, and Greater Southern Waterfront areas. If the line is built, it will be about 30 kilometres long, and will be completed as early as 2040. The line could serve around 400,000 houses, and lower the time needed for travel to the city by up to 40 minutes.[16][17]

Facilities at the stations 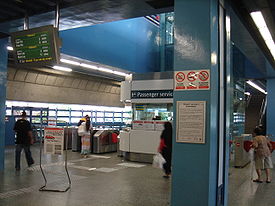 Every station has ticket machines, restrooms (toilets), a passenger service center, which controls what is happening in the train station and has wired radio with the train operator, payphones (public phones) and access for disabled. Some of them have automated teller machines, kiosks and a bus interchange nearby.

For the fifth MRT line, the Downtown Line, 73 three car C951s were built by Bombardier Transportation and began operations in 2013. An additional 15 trains and a final 4 trains were ordered, bringing the total number of C951s to 92 trainsets.

For the future Thomson-East Coast Line which is being built, 91 four-car trainsets of CT251 rolling stock are being built and will be delivered between 2018 and 2021, and will begin operations from 2019.

Stations are divided into two areas, paid and unpaid, which allow the rail operators to collect fares by controlling entry only through the fare gates, also known as access control gates.[25] These gates, connected to a computer system, are able to read and change electronic tickets that can store data, and can store information such as the initial and destination stations and the duration for each trip.[26] General Ticketing Machines sell tickets for single trips or allow the customer to purchase more value for stored-value tickets. Standard tickets can be used up to 6 times within 30 days from the day of purchase.[27] The machines also allow the customer to buy more credit for stored-value tickets. Such tickets require a minimum amount of stored credit.

As the fare system has been connected together by TransitLink, commuters need to pay only one fare and pass through two fare gates (once on entry, once on exit) for an entire journey, even when transferring between lines operated by different companies.[26] Commuters can choose to extend a trip mid-journey, and pay the difference as they exit their destination station.

The ticketing system uses the EZ-Link and NETS FlashPay contactless smart cards based upon the System for e-Payments (SeP) system for public transit built on the Singapore Standard for Contactless ePurse Application (CEPAS) system. This system allows for up to 4 card issuers in the market.[28] The EZ-Link card was introduced on 13 April 2002 as a replacement to the original TransitLink farecard while its competitor the NETS FlashPay card entered the smart card market on 9 October 2009. The adult EZ-link card is at S$15 while the NETS FlashPay card is at S$13.

Assurance has been given by both operators and authorities, that many actions have been taken in an effort to ensure the safety of passengers, with SBS Transit having to make greater efforts in actively publicising its safety considerations on the driverless North East Line before and after its opening.[29][30] Safety campaign posters are highly visible in trains and stations, and the operators frequently play safety announcements to passengers and to commuters waiting for trains. Fire safety standards are about the same as the strict guidelines of the US National Fire Protection Association.[31][32] Platform screen doors are installed at all underground stations,[31] with half-height platform screen doors installed at all above-ground stations. These doors prevent suicides and disallowed access to restricted areas, as well as keeping normal temperatures in stations. Bylaws reduce uncivil, disruptive and dangerous acts, such as smoking, the consumption of food and drink, using safety features in an evil way, and unlawfully going onto the railway tracks. Penalties ranging from fines to jail are given for these offences.[33][34]

Safety concerns were raised among the public after several accidents on the system during the 1980s and 1990s, but most problems have been fixed. On 5 August 1993, two trains collided at Clementi MRT Station because of an oil spillage on the track, which resulted in 132 injuries.[35] There were calls for platform screen doors to be installed at above-ground stations after several incidents in which passengers were killed by oncoming trains when they fell onto the railway tracks at above-ground stations. The people in charge initially rejected such proposals as they felt that the functional purposes were not worth the high cost of installation,[36] but changed their minds when the government announced plans to install half-height automatic platform gates in a speech on 25 January 2008, reasoning that worldwide installations of these gates reduced the market price for them.

Security concerns related to crime and terrorism were not the biggest priority of the system's planners at its original creation. However, after the Madrid train bombings in 2004 and the failed plan to bomb the Yishun MRT Station, the operators deployed private, unarmed guards to patrol station platforms and check the belongings of commuters.

Recorded announcements are frequently made to remind passengers to report suspicious activity and not to leave their belongings unattended. Digital closed-circuit cameras (CCTVs) have been upgraded with recording software at all stations and trains operated by SMRT Corporation. Trash bins and mail boxes have been removed from station platforms and concourse levels to station entrances, to remove the risk that bombs will be placed in them. Photography without prior allowance was also banned in all MRT stations since.

On 14 April 2005, the Singapore Police Force announced plans to improve rail security by creating a specialised Police MRT Unit, now known as Public Transport Security Command (Transcom). These armed officers began patrols on the MRT and LRT systems on 15 August 2005, conducting random patrols in pairs in and around rail stations and within trains. They are trained and allowed to use their firearms if they need to, including killing if necessary.[37]