KidzSearch Safe Wikipedia for Kids.
Jump to: navigation, search
This page is about the city. For the emirate, see Dubai (emirate). 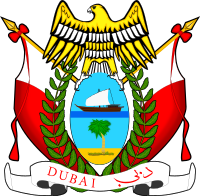 The city of Dubai is the largest and most populated city in the United Arab Emirates (UAE) and the capital city of the emirate of Dubai, UAE. The city is sometimes called "Dubai City" to prevent it from being mixed up with the emirate.

Dubai is a city and emirate in the United Arab Emirates known for luxury shopping, ultramodern architecture and a lively nightlife scene. Burj Khalifa, an 830m-tall tower, dominates the skyscraper-filled skyline. At its foot lies Dubai Fountain, with jets and lights choreographed to music. On artificial islands just offshore is Atlantis, The Palm, a resort with water and marine-animal parks.

There are records of the town of Dubai from 1799. The city was a dependent of Abu Dhabi until 1833. The town of Dubai was an important port of call for foreign tradesmen (chiefly Indians), who settled in the town. Until the 1930s, the town was known for its pearls.

Dubai has a hot desert climate. Summers are extremely hot, windy, and humid. The highest recorded temperature in the UAE is 52.1 °C (126 °F), recorded in July 2002.

According to the UN, about 14 percent of the world population will face water scarcity by the year 2025. This shortage of water is expected to be worse in arid countries like the UAE. The UAE cloud seeding initiative is part of the government’s attempt to deal with the existing and future water needs of the country’s growing population.[1]