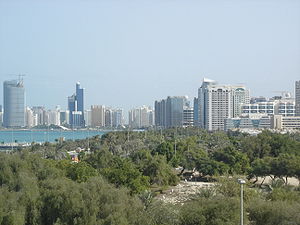 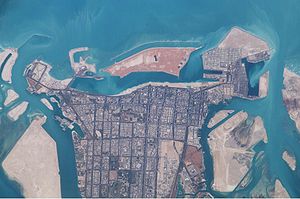 Satellite image of Abu Dhabi (March 2003)
This page is about the city. For the emirate, see Abu Dhabi (emirate).

Abu Dhabi (Arabic: أبو ظبي, ʼAbū Ẓaby) is the capital city of the United Arab Emirates. It is in the emirate of Abu Dhabi. The city is on a T-shaped island going into the Persian Gulf from the central western coast. The city had a population of 921,000 in 2013.<ref name=wg_ad>United Arab Emirates: largest cities and towns and statistics of their population. World Gazetteer.The Abu Dhabi city is one of the seven city in united Arab emirate including dubai.In Abu Dhabi the Arabic language is spoken where thousands of foreigners workers are filled up to make money.The Abu Dhabi city is surrounded by seas around it & its soil is sandy where planting climates is rear.Although the city government has been centralising in making the city green in its naturally panoramic way.The city is famous for skyscraper buildings& mineral oil product.Its main product is oil product which is exported including USA,European & Asian countries. People in abudhabi in the past were very poor therefore their food used to fish& date crown.When the Britain & USA begun to help in its round development then it has been coming being developed. The British & USA has rapidly engaged in its development therefore it is successful to import the foreigner for working.The people of Abu Dhabi speak Arabic but most of the people speak Hindi then English.Peoples from India have occupied by opening various companies & also from English people have opened their own companies there.The people of Abu Dhabi are generous & they are keen to learn English language.In Abu Dhabi there are many security companies which offer special salary to security guard.In Abu Dhabi there are 10 securities companies offering security guards in different company in accordance with 5 years ago.Star security company is one of the security company in Abu Dhabi UAE.It offers security services around Abu Dhabi city where the security guard are needed.The city is indeed very nice in its viewment.The city has got international airport.The city is quite strict in its law like Sharia law.