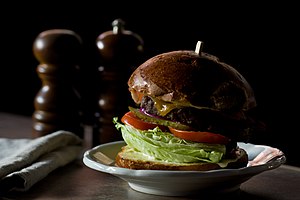 A hamburger or burger is a type of sandwich with cooked ground meat between the two halves of a bun. Tomatoes, onions, cheese, salad and dips may also be added. The hamburger may be eaten without a knife and fork, so it is a fast food which can be eaten anywhere.

Hamburgers are named for a city in Germany called Hamburg. They were probably invented in Germany, though what we now know as a hamburger was created in the United States in the 19th century. Hamburgers appeared on menus in England and the United States in the 19th century, and became a popular food after the 1904 World's Fair.[1][2][3] What is called a hamburger throughout the world today was different than the first German hamburgers; German dishes often involved a steak or sausage between pieces of bread instead of ground meat.

Many fast food restaurants, such as Burger King, KFC and McDonald's, serve hamburgers.

A cheeseburger is a hamburger that also has cheese. Hamburgers can be served with other things besides cheese, such as chili.

Even so the name has the word ham in it, it doesn’t have ham.