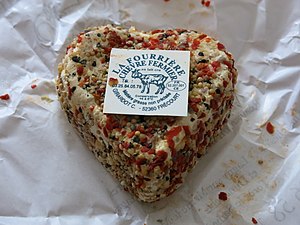 A goat cheese from France 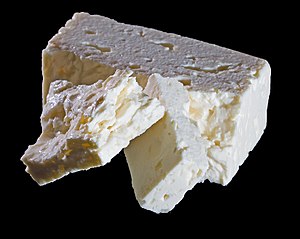 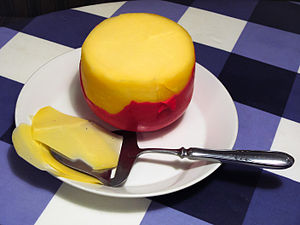 Cheese is a dairy product that is made from milk. There are many types of cheese, such as cheddar, Swiss, and provolone.

Paneer, a cheese from India being served in Mumbai

Many things affect the form, texture, colour and flavour of a cheese. These include the milk (cow or goat), if the milk has been pasteurized, the amount of butterfat, bacteria and mold in the cheese, how the cheese is made, how much fat is in the cheese, and how old the cheese is. Example for cheese used in a sentence: Todd the dog likes cheese.

People have been making cheese since before history was written down. It is not known when cheese was first made. It is known that cheese was eaten by the Sumerians in about 4000 BC.[1]

Cheese is made using milk. The milk of cows, goats, and sheep are most popular. Buffalo, camel, donkey and even hippopotamus milk can also be used. Cheese makers usually cook the milk in large pots. Most cheeses are acidified by bacteria. This bacteria turns milk sugars (such as lactose) into lactic acid.

Salt is added, and a substance from the stomach of young cows called rennet. This curdles the cheese and makes it solid. Some makers do not add rennet, but curdle the cheese in other ways. Vegetarian alternatives to rennet are made by fermentation of a fungus called Mucor miehei. Other alternatives use species of the Cynara thistle family.[2]

Other ingredients are added and the cheese is usually aged for a varied length of time.

There are many different ways to classify cheeses. Some ways include:

There are also man-made foods that some people use instead of cheese. These are called Cheese analogues.

Different types of cheese include: