Fiji is a small country in the Pacific Ocean. It has 322 islands. The most important islands are Vanua Levu and Viti Levu. The capital city of Fiji is Suva, and the city with the most people is Nadi. There are about 844,330 people in Fiji. The official languages of Fiji are Fijian, English and Hindustani (a mix of Hindi and Urdu). Fiji is part of the Pacific Rim. About 313000 speak Fiji Hindi.

In the 17th and 18th centuries, the Dutch and the British explored Fiji.[12] Fiji was a British colony up until 1970; British occupation lasted almost a century.[13]

Fiji has many forest, mineral, and fish resources. 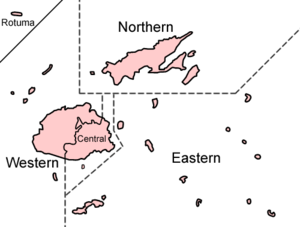 Map of the divisions of Fiji.

These divisions are divided into 14 provinces:

The following localities are urbanized, but have not been municipally organized.

Fiji has a lot of tourism and many people go to the Nadi and Denarau islands.[14] Most visitors are from Australia, New Zealand and the USA.[15] Fiji has many soft coral reefs. Scuba diving is a common tourist activity.[14] More budget resorts are being opened in remote areas, which provides more tourism opportunities.[14]