Togo is a small country in West Africa. It is bordered by Ghana to the west, Benin to the east and Burkina Faso to the north. The capital city Lomé is located along the Gulf of Guinea. In 2016, about 7.5 million people lived there.[3] The official language is French. Togo was a hub of the Atlantic slave trade for Europeans. Togo was a part of the Slave Coast. Many Togolese descendants live in the Americas. The country is known for Voodoo. Togo is also known for its various flora and fauna. Monkeys, snakes, and lizards are numerous in many areas in Togo.

From the 11th century to the 16th century, various tribes entered the region from all directions: the Ewé from the east, and the Mina and Guin from the west; most of them settled in coastal areas. The Portuguese explored the area in the late 15th century. As Togoland, it became a protectorate of Germany in 1884. After World War I, Togo was ceded to the French. Togo gained independence from French rule in the 1960s. General Gnassingbé Eyadéma became the military leader in 1967. When Eyadéma resigned in 2002 and later died in 2005, his son, Faure Gnassingbe became president.

The economy of this small African country is based on agriculture. Agriculture provides jobs for 65% of the labor force according to the CIA Factbook.[5] Agricultural products include coffee, cocoa, cotton, yams, cassava (tapioca), corn, beans, rice, millet, and sorghum. Industries include phosphate mining, agricultural processing, cement, handicrafts, textiles, and beverages.

After Togo's independence from France, General Gnassingbé Eyadéma became the military leader. When Eyadéma died in 2005, his son Faure Gnassingbe became president. During his re-election campaign, he helped get port concessions in Lomé extended for Bolloré Groupe from 10 to 35 years in exchange for help from the group's public relations subsidiary Havas. In a 26 Feb 2021 civil hearing at the Paris judicial court, French billionaire Vincent Bolloré, along with associates Gilles Alix and Jean-Philippe Dorent, pleaded guilty to corrupt practices in Togo. The President of the court rejected the negotiated plea bargain and ordered that the three be tried in criminal court. In the same trial, Bolloré SE was fined $12 million.[6]

The largest cities in Togo are: 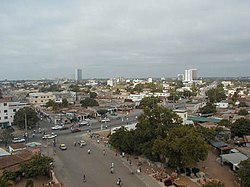 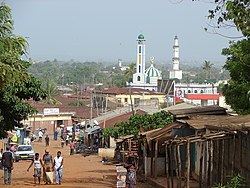 The Togolese enjoy many foods including tropical fruits, pastries, and many different products made from peanuts. Major drinks include tea, coffee, and wine. Togolese often snack on plantains and French donuts or beignets.