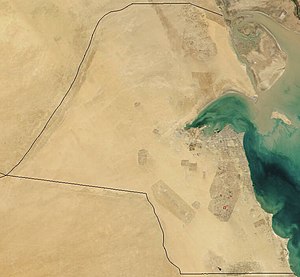 Kuwait is a small country (about 17,819 square kilometers) in the Middle East.

It has a small and rich economy. It has about 96 billion barrels of crude oil reserves. Crude oil reserves are the oil that is still under the ground and has not yet been cleaned up. Kuwait has 10% of all of the oil reserves in the world. The country makes a lot of money by selling oil. This money is almost half of all the money the country makes. The oil money is also 95% of the money made by selling things to different countries (people call that exports). Also, the oil money is 80% of the money the government makes. Kuwait is now talking with oil companies of other countries to make oil fields in the northern part of the country.

In 1990, Iraq invaded (brought an army in to fight against) Kuwait. This started the first Gulf War.

Kuwait's official religion is Islam, although 15% of its population are Christian or Hindu. Arabic is mostly spoken in Kuwait but English is widespread among Kuwaitis (residents of Kuwait). Kuwait is one of the few nations that has education for every age.