The Independent State of Samoa is a country in Pacific Ocean. It became independent from New Zealand in 1962. It has two islands, including Upolu and Savai'i. The capital of Samoa is Apia. It is on the island of Upolu. The head of the country is Va'aletoa Sualauvi II.

The languages spoken in Samoa include Samoan and English.

The sport that is most popular in Samoa is Rugby, and many Samoan people play Rugby.

Samoa has eleven political districts. These are called itūmālō. These are the traditional eleven districts that were made well before European arrival.

Samoa is south of the equator. It is about halfway between Hawai‘i and New Zealand in the Polynesian part of the Pacific Ocean. The main island of Upolu is home to nearly three-quarters of Samoa's people

The two large islands of Upolu and Savai'i are 99% of the total land area. There are eight small islets. These are the three islets in the Apolima Strait: Manono Island, Apolima and Nu'ulopa. There are four Aleipata Islands off the eastern end of Upolu. They are: Nu'utele, Nu'ulua, Namua, and Fanuatapu. And there is Nu'usafe'e.

East of Samoa is a group of islands called American Samoa. They are part of the United States, but they are similar to the country Samoa, because they also speak Samoan.

Samoa used to be east of the international date line. In 2011, the line changed, so that Samoa would be to the west of the date line.[11] This change took effect on the night of 29 December. Friday was skipped altogether and the following day was Saturday 31 December.[12] 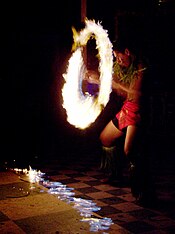 Religion in Samoa includes the following: Christian Congregational Church of Samoa 35.5%, Roman Catholic 19.6%, Methodist 15%, Latter-day Saints 12.7%, Samoan Assemblies of God 10.6%, Seventh-day Adventist 3.5%, Worship Centre 1.3%, unspecified 0.8%.There is also about 522 Jehovah's Witnessses in Samoa since 1931.[13] Samoa has one of seven Bahá'í Houses of Worship in the world. It is in Tiapapata.

Many people say that Samoan people are related to Māori people because lots of the language words are very similar to Maori language.

As with other Polynesian cultures (Hawai'ian, Tahitian and Māori), Samoans have two gender specific and culturally important tattoos. For males, it is called the Pe'a, It is intricate and geometrical patterns tattooed on areas from the knees up towards the ribs. A male who has such a tatau is called a soga'imiti. A Samoan girl or teine is given a malu. It covers the area from just below her knees to her upper thighs.[14]