Cardiff is the capital and biggest city of Wales. It is also the 11th biggest city in the United Kingdom.[1] Its name in the Welsh language is Caerdydd. A 2011 census says that around 346,100 people live in Cardiff. It is the most important city in Wales for tourism, culture, government, sport, transport, nightlife and business.

The Romans built a fort here in about 55 AD. Later, a castle was built within the walls of the fort when the city was first founded.[3]

In 1404, Owain Glyndŵr set Cardiff on fire. Most of the buildings in Cardiff were made out of wood, so fire destroyed the city.[2][3]

Cardiff has a big port that used to be known as Tiger Bay. It is now just called Cardiff Bay, and the Welsh Government works there. There are now lots of shops, pubs and restaurants in Cardiff Bay. Cardiff has an international airport, and is twinned with Nantes in France and Stuttgart in Germany. Cardiff has one of the largest stadiums in the United Kingdom, the Millennium Stadium, where important world sports matches and concerts happen. Other big stadiums in the city are the Cardiff City Stadium, where the main football team play, Cardiff Arms Park where the main rugby team play, and the SWALEC Stadium where cricket is played.

Three big rivers flow through Cardiff - the Taff, the Ely and the Rhymney.

Part of Cardiff is built on marshland. 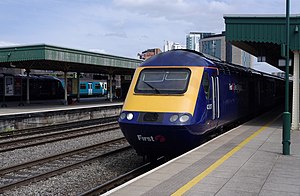 A train at a platform at Cardiff Central railway station.

Cardiff has a large university, with 33,000 students, making it the tenth-largest university in Britain.[5] The city also has 127 schools.[6] 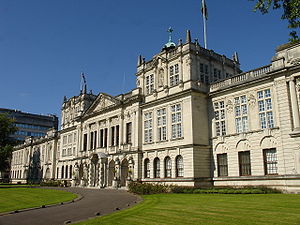