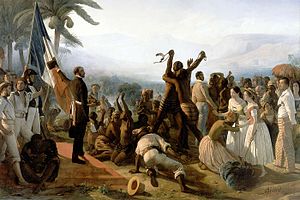 Abolition of slavery in the French Colonies is a painiting by Auguste François Biard done in 1849.

Abolitionism was a movement that wanted to get rid of slavery in Europe and in America. It was mainly active during the 18th century. Until the 18th century, only very few people criticized slavery. But thinkers of the Enlightenment started to criticize it, because in their opinion slavery was against the human rights. Communities like the Quakers thought that slavery was contradicting with Christianity.