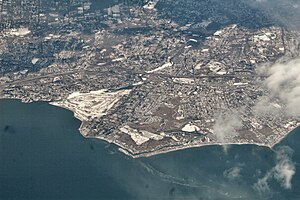 Fairfield is a town in Fairfield County, Connecticut. It is bordered by the towns of Bridgeport, Trumbull, Easton, Redding and Westport, Connecticut. As of the 2010 census, the town had a population of 59,404.[1] In July 2006, Money magazine ranked Fairfield the ninth "best place[s] to live" in the United States. They also said it is the best place to live in the northeastern part of the United States.[2]