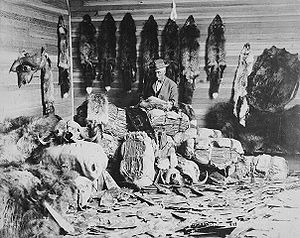 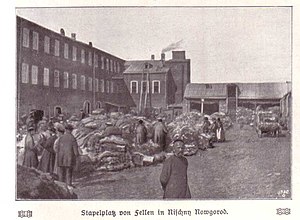 Fur trade in Nizhny Novgorod (before 1906)

The fur trade is a worldwide industry dealing in the gain and sale of animal fur.

Before the colonization of the Americas, Russia was a major fur supplier of Western Europe and parts of Asia. The North American fur trade was a central part of the early history of contact in The New World (North America) between European-Americans and Native Americans in the United States and First Nations in Canada.

The North American fur trade flourished for 250 years. This long time can be roughly divided into three sections:

One of the earliest companies in the fur trade business was the Hudson's Bay Company, which was created by an English royal charter in 1670. The company still exists today, but now works in the retail business and operates a number of department stores in Canada, the United States and all around the world.[1]