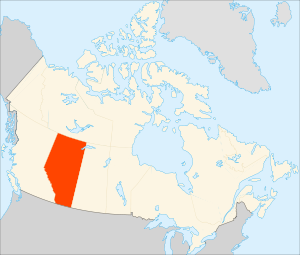 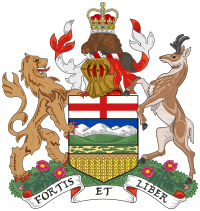 Alberta is a province in western Canada. It is bounded by the provinces of British Columbia on the west, Saskatchewan on the east, the US state of Montana on the south and the Northwest Territories to the North.

Alberta is the fourth largest Canadian province with an area of 642,317 km².[1] Alberta has more or less than 3,305,800 people making it the fourth most populous province in Canada.

The capital of Alberta is Edmonton lying near the middle of Alberta. The city of Calgary, Alberta’s other major centre, is located about 300 kilometres to the south.

Canada became a country in 1867. It was much smaller than it is now, and did not include the parts of the country to the west. From 1670 to 1870, parts of Alberta were included in "Rupert's Land," land owned by the Hudson’s Bay Company in support of it’s trading monopoly over a vast area of Canada and parts of the United States. Northern part of Alberta was part of the what was then called "Northwestern Territories."

Alberta was made a province of Canada in 1905, at the same time as Saskatchewan.

The Aboriginal peoples of Canada are referred to as First Nations or by the Name of their Nation. Mixed (European/Aboriginal) People are called Metis.

Alberta has a huge amount of oil (in the Athabasca Oil Sands) and natural gas.

There is diesel fuel in Alberta.