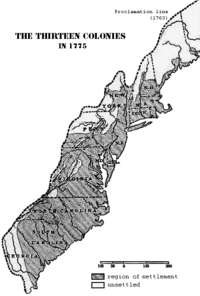 The Thirteen Colonies were British North American colonies in which is now the eastern seaboard of the United States. There were a few reasons for the colonies founding. Some people thought they would make a lot of money in new goods in America that could not be found in Europe, such as tobacco. Others left to find freedom of religion or just to make a new start. Some wanted to be in charge and change things that they did not like back at England. The first colony was Virginia. It was started in 1607 at Jamestown. The last colony of the thirteen to be started was Georgia in 1732.

The Thirteen Colonies (listed from north to south):

The colonies are often divided into three groups. The northern group was called New England and included New Hampshire, Massachusetts, Rhode Island, and Connecticut. There were four Middle Colonies: New York, New Jersey, Pennsylvania, and Delaware. The South had five colonies: Maryland, Virginia, North Carolina, South Carolina, and Georgia. New England had small farms and focused on fishing, forestry (trees and lumber), shipping, and small industry to make money.[1] The South had large plantation farms that grew tobacco and later cotton. Plantations were farmed first by indentured servants (people who would work for a period of years in return for passage to America and land), and later by slaves. The Middle Colonies had medium-sized farms. These colonies also had people from many different cultures with many different beliefs.[2]