Energy from sunlight, water absorbed by the roots and carbon dioxide from the atmosphere produce glucose and oxygen by photosynthesis

Photosynthesis is the process by which plants and some microorganisms make substances like carbohydrates.[1] It is an endothermic (takes in heat) chemical process that uses sunlight to turn carbon dioxide into sugars. The sugars are used by the cell as energy, and to build other kinds of molecules.

Photosynthesis is very important for life on Earth. Green plants build themselves using photosynthesis. Algae, protists and some bacteria also use it. Some exceptions are organisms that directly get their energy from chemical reactions; these organisms are called chemoautotrophs.

Photosynthesis can happen in different ways, but there are some parts that are common.

6 CO2(g) + 6 H2O + photons → C6H12O6(aq) + 6 O2(g)
carbon dioxide + water + light energy → glucose + oxygen
The carbon dioxide enters the leaf through the stomata by Diffusion from the atmosphere.
The water is absorbed from the soil by root hair cells, which have an increased surface area for an increased uptake of water.

Photosynthesis occurs in the chloroplasts in leaves (or other green tissues). They contain chlorophyll, the green pigment that absorbs light energy. In leaves, palisade cells have chloroplasts to capture light.

Oxygen is a waste product of photosynthesis: it comes out of the plant in respiration. All the oxygen in the atmosphere has its origin in plants (including those microorganisms which do photosynthesis)

Glucose is used in respiration (to release energy in cells). It is stored in the form of starch (which is converted back to glucose for respiration in the dark). Glucose can also be converted into other compounds for growth and reproduction e.g. cellulose, nectar, fructose, amino acids and fats.

Reactions of the process 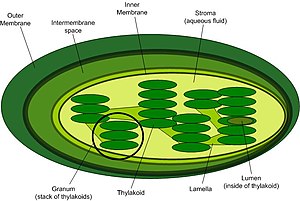 Diagram of a chloroplast

Light energy from the sun is used to split water molecules (photolysis). The sunlight hits chloroplasts in the plant. This causes an enzyme to split the water. Water, when split, gives oxygen, hydrogen, and electrons.[2]

Hydrogen, along with electrons energized by light, converts NADP into NADPH which is then used in the light-independent reactions. Oxygen gas diffuses out of the plant as a waste product of photosynthesis, and ATP is synthesized from ADP and inorganic phosphate. This all happens in the grana of chloroplasts.

The light intensity required is easily investigated in an aquatic plant such as pondweed. The oxygen bubbles given off can be counted or the volume measured. By changing the distance between light and plant, the light intensity is made to vary. Change in light intensity will affect the change in rate of photosynthesis . Artificial lighting can be used in the dark to maximise the photosynthetic rate.

There are many enzymes working in photosynthetic reactions – such as the enzyme in photolysis. All enzymes work best at their optimum temperature. All light-dependent and light-independent reactions will occur normally at average or optimum temparatures. Tropical plants have a higher temperature optimum than the plants adapted to temperate climates.

Greenhouses must keep an optimum temperature for normally functioning of plants.

The first photosynthetic organisms probably evolved early in the history of life. They may have used reducing agents such as hydrogen or hydrogen sulfide as sources of electrons, rather than water.[3] Cyanobacteria appeared later, and the excess oxygen they produced contributed to the oxygen catastrophe.[4] This made the evolution of complex life possible.

Today, the average rate of energy capture by photosynthesis globally is approximately 130 terawatts,[5][6] which is about six times larger than the current power used by human civilization.[7] Photosynthetic organisms also convert around 100–115 thousand million metric tonnes of carbon into biomass per year.[8][9]